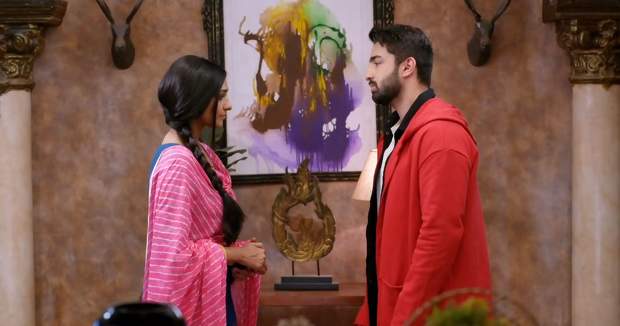 Today's Bhagya Laxmi 14th March 2022 episode starts with Malishka being angry at Rishi for not playing Holi with her.

So, Rishi sees colors nearby and applies the same to Malishka.

Malishka asks Rishi to tell him how can she show that Rishi only belongs to her.

However, Rishi asks Malishka to stop bringing Lakshmi into each and every matter.

When Malishka continues to act rude, Rishi walks away.

Meanwhile, Lakshmi sees Dida coughing continuously and decides to make a Kaada for her.

Balwinder overhears Lakshmi and follows her to the kitchen.

However, Balwinder fails to take advantage of the situation as Rishi arrives there.

When Rishi asks Lakshmi what is doing there alone, Lakshmi sarcastically replies saying that she'll bring the whole team next time.

Rhea and Aliya's plot against Prachi

On the other hand, Rhea argues with Prachi and makes her feel that Ranbir belongs to her which breaks Prachi's heart.

When Prachi gives a befitting reply, Rhea goes to Aliya to express her grief.

Later, Aliya gives acidic colors to Rhea and asks her to apply them on Prachi's face to take revenge on her.

Rishi takes Lakshmi's finger and puts it in a jar of water and later blows air on the burn to make Lakshmi feel better.

At the same time, the color of Rishi's hair gets into his eyes.

So, Lakshmi makes Rishi sit on a chair and blows air into his eyes to take out the color.

Further, Lakshmi removes the colors stuck in Rishi's hair after which Rishi asks Lakshmi to fix his hair back.

Realizing that she has to give Kaada to Dida, Lakshmi moves away and at the same time sees Ayush looking at them from a distance.

Ayush tries to look away but Lakshmi catches him red-handed.

Lakshmi walks away with her blushed cheeks while Ayush teases Rishi.

Rishi sees Ranbir isolated in his room and goes to check upon him.

Further, Rishi confronts Ranbir about seeing him and Prachi showing their love for each other through their eyes.

At the same time, Ayush overhears them and jumps into the room.

Ayush says that Ranbir still loves Prachi but he is stuck with Rhea.

On the other hand, Rishi loves Lakshmi but he is going to marry Malishka.

Rishi says that he loves Malishka but Ayush and Ranbir refuse to accept it.

Further, Ranbir tells his and Prachi's story to Rishi and advises him not to repeat the mistake he did by marrying Rhea.

However, everything goes in vain when Malishka calls out for Rishi through the door.