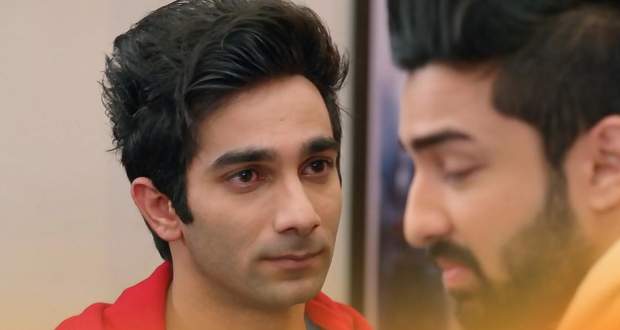 Today's Bhagyalaxmi 14 October 2021 episode starts with Malishka getting happy seeing the love band and romancing with Rishi while Aayush teases Shalu who leaves to see Lakshmi.

Lakshmi tells Shalu about the live band and gets shy while Shalu teases her.

Virender asks Rishi if he has arranged the gift and Rishi says yes thinking that he is talking about their anniversary gift while Virendar is actually talking about Lakshmi's gift.

Lakshmi tells them to come to see the decorations at 7 in the evening and they agree and leave while Sonia overhears them.

Malishka shows the love band to Karishma while Sonia comes there and they form a plan to put down Lakshmi in front of everyone but ruining the decorations.

Meanwhile, Lakshmi helps Ahana and Devika in choosing their outfit for the party while Neelam invites the guests through call.

Virender compliments Neelam while she says that she married him just for his father's happiness while Malishka comes there and informs them that she is treating all the employees to lunch.

Lakshmi and the decorator are looking over things when Karishma and Sonia cit the rope of the main ribbon which holds all the decorations which fall on Lakshmi.

The decorator refuses to do it again and leaves while Lakshmi gets a call from the DJ saying that he can't come.

Lakshmi gets tensed and goes to Ahana and Devika to ask for their help.