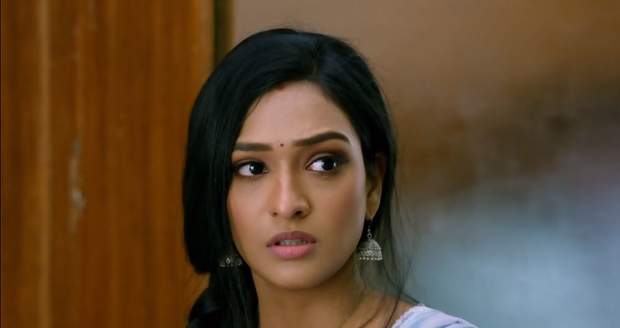 Neelam asks Rano why has Lakshmi not returned with her. Rano says that Lakshmi has been cheated in that house and she'll never come back there.

Further, Rano says that Lakshmi needs money to afford a living and they'll have to give her alimony.

To Neelam's surprise, Rano demands alimony in return for Lakshmi and Rishi's divorce.

At the same time, Karishma comes there and talks ill about Lakshmi and says that Lakshmi planned to leave the house for alimony.

On the other hand, Lakshmi's auto and Rishi's car halt coincidentally in front of the same temple.

Accepting the halt as God's sign, Rishi and Lakshmi get inside the temple to pray.

While Rishi prays to Goddess for meeting Lakshmi once and explaining her his side, Lakshmi prays for not having to meet Rishi.

Meanwhile, Virendra gets shocked to hear about alimony being Lakshmi's demand.

Neelam reminds Rano that divorce is required to attain alimony. Rano says that Lakshmi wants to get divorced from Rishi.

Seeing Rano's fake concern, Virendra says that this is her idea because Lakshmi will never think about divorce.

Further, Rano says that even if they do not believe her yet she'll seek compensation from the Oberois.

Later, Rishi and Lakshmi arrive at the same office where Lakshmi sees Rishi.

Upcoming Bhagyalaxmi episode updates: Lakshmi and Rishi come face to face when they arrive at the same office.

© Copyright tellybest.com, 2020, 2021. All Rights Reserved. Unauthorized use and/or duplication of any material from tellybest.com without written permission is strictly prohibited.
Cached Saved on: Wednesday 19th of January 2022 12:37:50 PM