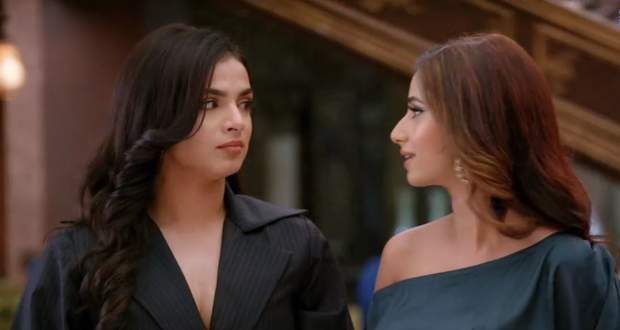 Rhea and Balwinder team up

Using the opportunity for her benefit, Rhea puts forth an offer.

Rhea asks for Balwinder's help to apply those acidic colors on Prachi's face.

In return, Rhea says that she'll make sure that no one is around Lakshmi which will allow him to kidnap her without fear.

When Balwinder agrees on the terms, Rhea shows Prachi's picture to him.

On the other hand, Malishka gets angry at Rishi because he walked away without completing their talk.

Frustrated by Malishka's behavior, Rishi chides her for doubting him.

In anger, Rishi tells Malishka that the way she is talking to him will ruin their relationship.

However, Malishka talks to Kiran who advises her to be calm like Lakshmi because it will bring Rishi closer to her.

Lakshmi finds out about Prachi's pregnancy

When Lakshmi arrives there, Ayush changes the topic because he was asking Prachi's advice to reunite Lakshmi and Rishi.

Prachi tells Lakshmi that she is pregnant and informs that she needs to stay away from the Holi colors.

Hearing this, Lakshmi hugs and congratulates Prachi and offers to bring something sour for her on her request.

In the meantime, Rhea gives gloves and the acidic color to Balwinder to be applied on Prachi's face.

Later, while searching for Prachi, Lakshmi overhears Balwinder mentioning the chemical-filled colors to apply on Prachi.

Suspiciously, Lakshmi asks Balwinder and his friends who they are without seeing their faces.

However, Balwinder and his friends flee in thin air.

A rift between Malishka and Sahana

While Sahana and Ayush are talking near a corridor, Malishka walks through them by pushing Sahana.

When Sahana asks Malishka what kind of behavior is this, Malishka repeats pushing Sahana.

This leads to a heated argument between Sahana and Malishka after which Sahana asks Malishka to behave nicely with people, especially with Lakshmi.

As Ayush supports Sahana, Malishka threatens to complain about him to Rishi and walks away.

Meanwhile, Lakshmi sees the man who was talking about applying acidic colors to Prachi moving towards Prachi.

To save Prachi, Lakshmi brainstorms an idea and picks up a water gun.