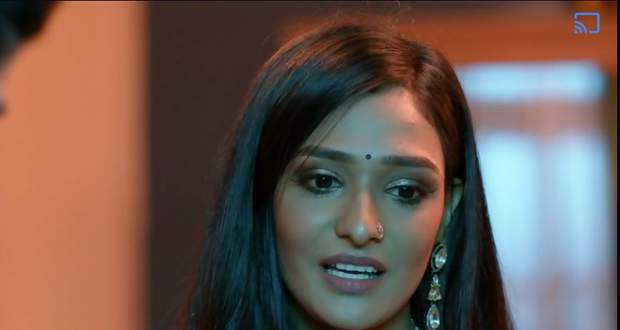 Today's Bhagyalaxmi 15 November 2021 episode starts with Rishi offering sweets to Lakshmi to make her feel better as she was feeling dizziness.

Rishi feeds the sweet to Lakshmi while Malishka sees this and gets jealous. To get back at Rishi, Malishka asks Rishi to play music and dance with Viraj.

On the other hand, Neha sees Shalu and Ayush in a romantic position and starts pulling Ayush's hands to come with her. Shalu holds Ayush's other hand which ends up making everyone fall on the ground.

Shalu tries to take Ayush away from Neha as Shalu previously overheard Neha telling someone about her plan to marry Ayush for his money.

Meanwhile, Rishi takes MAlishka to his room where he tries to explain her that he has not changed and he still loves her. Malishka refuses to accept it.

Suddenly, Lakshmi and Viraj come there searching for them. Rishi and Malishka hide in the bathroom.

Elsewhere, Neha plans to make Ayush stick with her all Diwali night and asks him to come to the kitchen by some excuse. Shalu tries to stop Ayush but he goes to help Neha.

Further, Viraj asks Lakshmi what made her marry Rishi. Lakshmi avoids answering and tries to leave from the room. Viraj tells her that he thinks she married Rishi just for someone's sake and she doesn't love him.

Lakshmi tells Viraj that she fell in love with Rishi before their marriage.