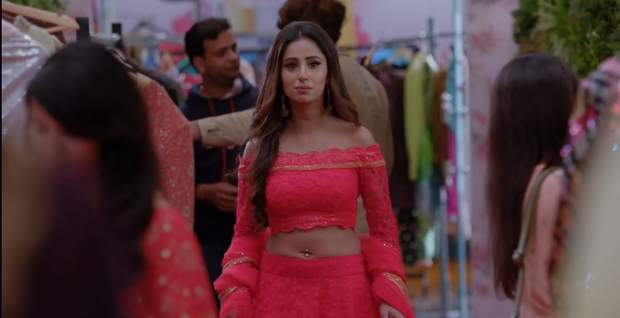 Today's Bhagyalaxmi 16 December 2021 episode starts with Lakshmi meeting Malishka after coming out of the changing room.

Further, Lakshmi tells Malishka that she is wearing the same bridal outfit that Lakshmi had selected for Malishka.

Lakshmi wonder how did the salesperson give the outfit to Malishka.

The salesperson comes there and says that Malishka's husband, addressing Rishi asked her to give it to Malishka.

Malishka manages the situation by thanking Viraj for choosing such a beautiful outfit.

Meanwhile, Malishka hears the ringtone and comes out of the changing room. She finds Rishi there and feels relieved that Rishi isn't with Lakshmi in her room.

Later, Viraj asks Malishka where is her car when Rishi says that Malishka came to the shop in his car.

Further, Rishi and Lakshmi leave for the Oberoi mansion while Viraj offers to drop Malishka.

Malishka is frustrated as she was spending a good day with Rishi but everyone came to interrupt them.

On the other hand, Rishi holds Lakshmi's hand to help her cross the road.

When Lakshmi is about to get hit by a biker, Rishi pulls her closer to him.

A transwoman sees them and tells them that they can see things that other people can't. She tells Rishi and Lakshmi that they are made for each other and they'll always stay together.

Upcoming Bhagyalaxmi episode updates: Virendra asks Malishka to think before taking any wrong step as it can ruin three lives at the same time.

© Copyright tellybest.com, 2020, 2021. All Rights Reserved. Unauthorized use and/or duplication of any material from tellybest.com without written permission is strictly prohibited.
Cached Saved on: Thursday 20th of January 2022 05:14:00 AM