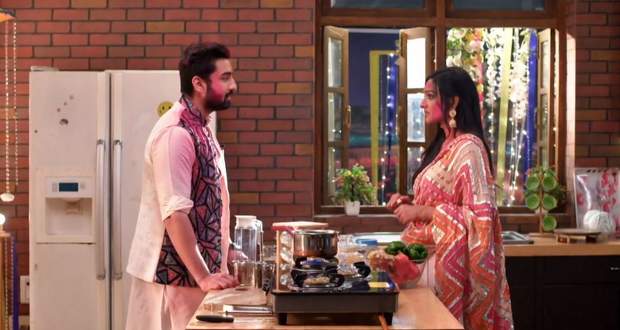 Today's Bhagya Laxmi 16th March 2022 episode starts with Lakshmi trying to save Prachi from the guy who is going to harm her with chemical-filled colors.

Though Lakshmi is unaware that the guy is none either than Balwinder, Lakshmi picks up a water gun and throws it at him.

Somehow, Balwinder vanishes from there but Lakshmi follows him.

However, Aliya distracts Lakshmi while Rhea takes Balwinder and his friend to the room.

Later, as Balwinder failed Aliya's plan, she gets into a heated argument with him.

On the other hand, Sahana finds out about the incident with Prachi and gets furious.

When Sahana decides to confront Rhea and Aliya, Prachi and Lakshmi calm her down.

Further, Sahana tells Lakshmi how Rhea has been hurting Prachi since her first day of marriage.

Realizing that Prachi is going through the same pain as hers, Lakshmi hugs Prachi and Sahana.

At the same time, Rishi arrives there and sees tears flowing through Lakshmi's cheeks.

Rishi gently wipes out Lakshmi's tears after which they look at each other knowing they are close by heart but far in reality.

When Prachi and Sahana see Rishi, he makes an excuse of finding the washroom and walks away.

After Rishi leaves, Prachi and Sahana tell Lakshmi that she should not let Rishi marry Malishka because he loves Lakshmi only.

Malishka teams up with Balwinder

In the meantime, Malishka overhears Balwinder asking Aliya and Rhea whether they'll help him to kidnap Lakshmi.

Malishka says that she'll help him by bringing Lakshmi out of Prachi's room.

On the other hand, Lakshmi asks Prachi to have a conversation with Ranbir and leaves the room.

Seeing this, Malishka informs Balwinder about Lakshmi's location and asks him to take her away as soon as possible.

Meanwhile, Rishi and Malishka come face to face and they say sorry to each other.

Though Malishka thinks that Rishi said sorry because he loves her, Rishi says that his mother has taught him manners that don't allow him to talk rudely to a woman.

At the same time, Lakshmi arrives there and sees Rishi and Malishka hugging.

As Lakshmi couldn't control her tears, she runs away.

Balwinder gives her a tissue and tries to kidnap her but Lakshmi flees away.

In the meantime, Rishi scolds Malishka for coming too close to him without his consent.

Further, Balwinder gets hold of Lakshmi and tries to forcefully play Holi with her.

However, Lakshmi gets into his clutches again and he starts molesting her.

Further, Balwinder tries to take away Lakshmi's mangalsutra but Lakshmi slaps him again.

When Rishi arrives there and asks Balwinder to leave Lakshmi alone, Balwinder tells Rishi that he has Malishka then why does he want him to be away from Lakshmi.

Balwinder takes Lakshmi with him by keeping a knife on Lakshmi's neck.

Suddenly, Ranbir comes there and fights with Balwinder to save Lakshmi.

Rishi, Ranbir, and Ayush together beat up Balwinder and his friends.

If Balwinder gets arrested, Malishka will also be in trouble.

So, Malishka hints at Balwinder to take her as a hostage to escape and he follows her orders.