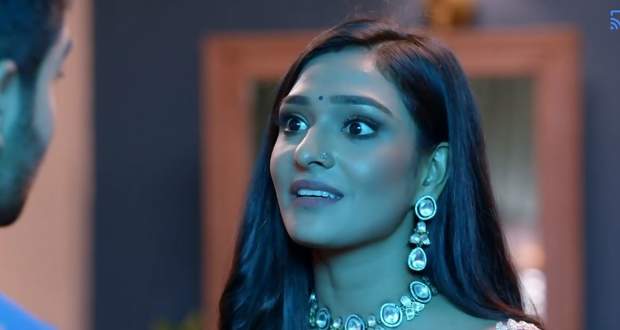 Today's Bhagyalaxmi 16 November 2021 episode starts with Lakshmi praising Rishi in front of Viraj. Lakshmi tells him how she meet Rishi and how she fell in love with him.

Rishi feels good listening to Lakshmi's love for him but Malishka will be very angry.

After Lakshmi and Viraj leave the room, Malishka tells Rishi that she doesn't love him anymore.

Neelam comes there and sees them arguing and coming out of the bathroom together.

Elsewhere, when Shalu stops Ayush from going to meet Neha, Ayush asks Shalu why is she stopping him. Shalu tells Ayush that Neha is trying to get him to date her.

Meanwhile, Neelam scolds Rishi and Malishka for being alone in Rishi and Lakshmi's bedroom.

Malishka leaves from there after which Neelam asks Rishi to respect the relationship he is in currently.

In the kitchen, Neha gets happy when Ayush comes there. Neha asks Ayush to take down a box as she wanted the flour in it to fall on them and they can go to change.

At the same time, Shalu texts Ayush and asks for help. Ayush tells Sudeep to take down the box and goes to help Shalu.

While Sudeep takes down the box, the flour in it falls on him and Neha. Rano sees this and takes Neha away.

On the other hand, Malishka forcefully takes Lakshmi to the garden where Malishka tells Lakshmi that she wants Rishi but Lakshmi took him away from her.

© Copyright tellybest.com, 2020, 2021. All Rights Reserved. Unauthorized use and/or duplication of any material from tellybest.com without written permission is strictly prohibited.
Cached Saved on: Wednesday 19th of January 2022 12:44:42 PM