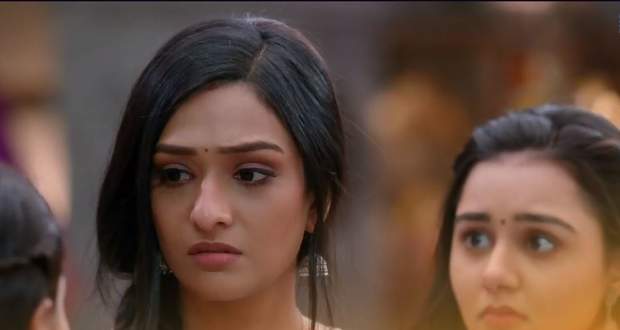 When Lakshmi sees Rishi, Lakshmi walks out of the lift, and Rishi gets stuck inside.

On the other hand, Ayush waits outside Lakshmi's colony to meet Lakshmi once.

At the same time, Shalu arrives there. When Ayush tries to talk to Shalu, Shalu tells Ayush that he has no idea how wrong he was in helping his brother cheat on Lakshmi.

Ayush explains to Shalu that he and Virendra tried their best to sort things out.

Meanwhile, Rishi keeps searching for Lakshmi in the whole building.

Further, Ayush says that he has not come to justify anything. He says he just wants to make sure that Lakshmi is fine.

In the meantime, Rishi sees Lakshmi giving an interview and thinks that it won't be appropriate to talk to her inside the office.

Rishi waits for Lakshmi outside the office and stops her when she comes out.

Elsewhere, Rano gets Rishi and Lakshmi's divorce papers ready from an advocate and says she'll pay him when the divorce is done.

When Lakshmi does not respond to anything that Rishi says, he asks her why can't she give him a chance to explain himself.

Lakshmi tells Rishi she'll ask him just one question and maybe after that, he won't have anything left to explain.

Further, Lakshmi asks Rishi whether he has seen the picture in their room. She corrects her statement by saying 'his room' instead of 'theirs'.

Rishi recalls seeing their wedding picture cut in half.