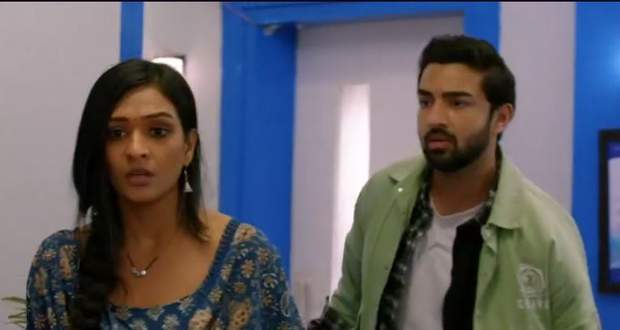 Today's Bhagya Laxmi 18th February 2022 episode starts with Lakshmi trying to find the network to make a call to the police.

When she realizes that she is near the locker room, Lakshmi decides to go to some other cabin.

In one of the cabins, Lakshmi finds some fluctuating network.

Finding it to be the best way, Lakshmi makes a video seeking help to save the people stuck at the bank that has been attacked by robbers and sends it on social media.

At the same time, a robber enters into that room and points a gun at Lakshmi.

Meanwhile, Rishi also gets caught by another robber.

Both the robbers let them close their eyes and remember their loved ones.

Rishi and Lakshmi recall their family and lastly think about each other while the robbers start a count down to shoot them.

A bullet is fired at the bank to threaten Malishka. At the same time, the Diya kept by Neelam goes off which frightens her to a great extent.

Rishi and Lakshmi are untouched but are extremely terrified for each other's safety.

At the Oberoi mansion, everyone finds out about Lakshmi's video seeking help.

Hearing this, Neelam immediately leaves for the bank.

In the meantime, a dashing and heroic police officer, Rakesh Singh is seen on his way to the bank.

At the bank, Ayush grabs the gun from the boss and makes some of the hostages escape.

The boss takes his gun back and beats Ayush for trying to be over-smart.

At the same time, Rishi is brought there by other robbers.

Malishka hugs Rishi and refuses to stay away from him.

Seeing this from a distance, Lakshmi breaks down.

Shalu slowly sneaks into a cabin and tries to calm down Lakshmi whose heart is shattering into pieces again.

On the other hand, the robbers' boss sees Lakshmi's video on the news and grins in anger while Rishi smirks at Lakshmi's smartness.