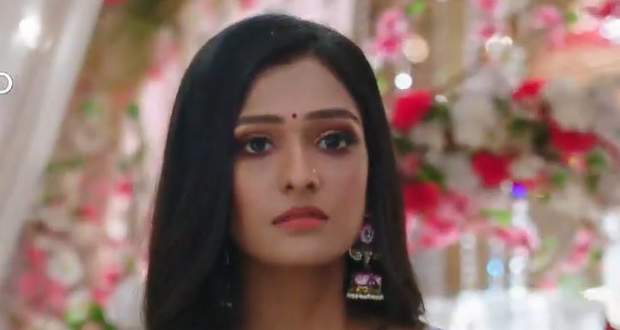 Today's Bhagyalaxmi 18 September 2021 episode starts with Lakshmi applying the ointment on Rishi while he fakes a smile.

Meanwhile, Sonia tells Malishka that she overheard Mom says that she will get Lakshmi settle once again herself after remarriage with Rishi ends while Malishka decides to spend the night there.

Elsewhere, Rishi lies to Lakshmi that he is used to sleeping alone as he tosses and turns in the sleep and she tells him that she will sleep on the sofa until he recovers.

He feels guilty thinking that she always care about him first.

Later, Malishka and Rishi are messaging each other while he seeing Lakshmi coughing and goes to give her water.

She praises him for being good and goes to sleep and he looks at her while Malishka gets upset not getting a reply form Rishi.

The next day, Lakshmi is making arrangements for Lord Ganesh's idol while Karishma insitgates Malishka saying that Neelam only likes her house being decorated by the designer but won't say anything to Lakshmi.

Karishma goes to Neelam and questions her while Meelam reveals that Panditji had called last night and said to let Lakshmi do all the arrangements and rituals.

Karishma asks her if she has accepted Lakshmi as Rishi's wife while Neelam mocks her asking if she should reveal that Rishi loves Malishka and wants to separate from Lakshmi after his market fish ends.

Further, she tells Karishma to make Rishi and Malishka do all the couple rituals together.

Later, Virendra, Rishi and Ayudh bring the Ganesh idol home while Lakshmi says that she will make the Bhog and Dadi and Neelam let her do it while offering to help her.

Meanwhile, Rishi sees Malishka upset and goes after her to the kitchen where she tells him that he has changed because of Lakshmi and he tells her to not talk ill about her which shocks Malishka.

© Copyright tellybest.com, 2020, 2021. All Rights Reserved. Unauthorized use and/or duplication of any material from tellybest.com without written permission is strictly prohibited.
Cached Saved on: Wednesday 13th of October 2021 06:42:52 PMCached Disp on: Thursday 21st of October 2021 09:23:41 PM