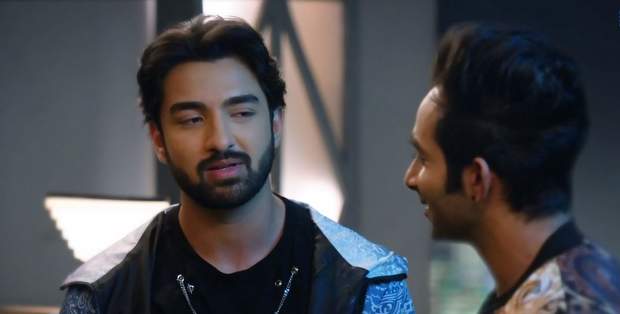 Today's Bhagya Laxmi 19 January 2022 episode starts with Lakshmi seeing the dinner made for her by Rano and recalls her moments with the Oberois at the dining table.

On the other hand, Rishi and Ayush return home where Karishma tells Rishi that Rano had come to ask for alimony from the Oberois.

Sonia talks ill about Lakshmi which makes Rishi very angry. He scolds her and asks her to stop talking between him and Lakshmi.

Ayush follows angry Rishi to his room where Rishi tells him that he misses his best friend Lakshmi.

In the meantime, Rano talks sweetly with Lakshmi and says that if she has decided not to return to the Oberoi mansion then she should get divorced from Rishi and move on in her life.

Hearing this, Lakshmi feels startled. So, Shalu, Baani, and Chachaji take Lakshmi to her room.

While talking, Rishi tells Ayush that he didn't even realize when did Lakshmi become such an important part of his life.

Further, Rishi talks about Lakshmi's silly but lovable stories and the times she used to make him feel special.

Rishi also adds that Lakshmi is a very sweet girl and anyone could fall in love with her.

Listening to Rishi's words, Ayush asks him didn't he fell in love with Lakshmi.

As Rishi didn't have an answer, he walks away.

Meanwhile, Pritam warns Rano to stay away from Lakshmi and asks not to talk to her about Rishi or divorce from him.

When Rano refuses to agree, Pritam threatens to throw her out of the house.

After Pritam leaves, Rano decides to get Lakshmi and Rishi divorced by hook or by crook.

Upcoming Bhagyalaxmi episode updates: Rano gets Lakshmi's thumbprint on the divorce papers of Laxmi and Rishi.