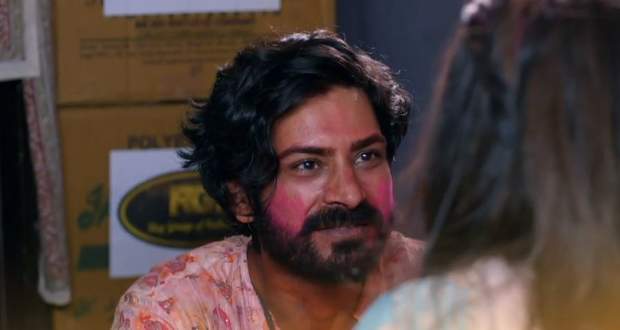 On the other hand, Shalu threatens Balwinder by saying that Lakshmi won't spare him for kidnapping her sister, Shalu.

In the meantime, Lakshmi starts worrying for Shalu and informs Shalu.

Lakshmi tells Pritam that Shalu never stays out alone without letting her know.

Meanwhile, the doctor arrives at the Oberoi mansion to check Malishka who fainted while talking to Neelam.

The doctor says that Malishka is going through some stress which caused the dizziness.

Further, Sonia tells Kiran and Neelam that Lakshmi is the reason for Malishka's stress.

Hearing this, Neelam gets angry and asks Sonia to tell Rishi that she wants to talk to him.

In Rishi's room, Rishi and Ayush sleep side by side when Rishi dreams of playing Holi with Lakshmi.

Though Rishi is in sleep, his hands caress Ayush's hands and cheeks.

While Ayush teases Rishi for dreaming about Lakshmi and trying to hold Ayush's hand in sleep, Sonia arrives there and tells Rishi that Neelam urgently wants to speak to him.

On the other hand, Lakshmi and others start searching for Shalu.

Meanwhile, Balwinder leers at Shalu and asks her whether she is looking at him with anger or love.

Shalu gives a befitting reply by saying that an idiot like him can never understand what a woman's anger can do.

At the same time, Balwinder gets a call from Rano who informs him that everyone is crazily searching for Shalu.