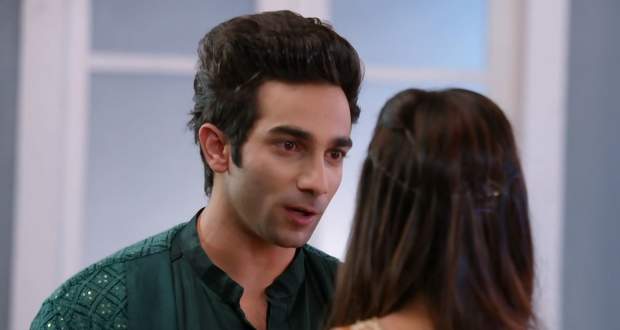 Today's Bhagyalaxmi 19 November 2021 episode starts with Virender, Ayush, Lakshmi, and her sisters having fun in the room.

Suddenly, Rishi enters there and looks in a bad mood. Everyone else leaves from there leaving Lakshmi and Rishi alone.

Lakshmi thanks Rishi for saving her from the fire but Rishi gets angry at her. Rishi asks Lakshmi to take care of herself as he has his own life too.

On the other hand, Ayush goes to drop Shalu and Baani home where Ayush asks Shalu whether she has started liking him. Shalu starts smiling when Ayush laughs hard and tells her that he was joking.

Meanwhile, Lakshmi gets hurt while taking out her clothes. Rishi sees this and asks her what happened. Lakshmi refuses to tell anything as Rishi had asked her to take care of herself.

Rishi apologizes for his previous behavior and sees Lakshmi's wound and goes to bring first aid.

Further, Lakshmi asks Rishi who made Rishi angry earlier. Rishi tells Lakshmi that he was angry at Malishka as she left the house weirdly.

Rishi suggests to Lakshmi that she should not allow anyone to disrespect her.

Further, Lakshmi thanks Rishi for everything.

Meanwhile, Viraj tells Kiran that he suspects Malishka loves someone from the Oberoi family.

Kiran tells Viraj that he is overthinking and Viraj leaves from there.

Suddenly, Malishka comes there and tells Kiran that Rishi used to call her every minute and he has stopped doing it now.