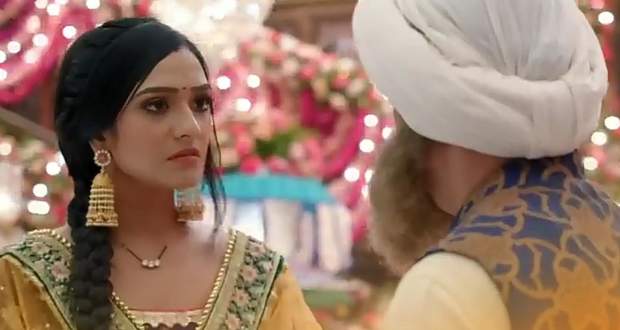 Today's Bhagyalaxmi 19 October 2021 episode starts with Rishi ordering a dupatta for Lakshmi as her chunri was torn because of Malishka.

Rishi takes Lakshmi out of the kitchen and shows her the chunri he has ordered for her. He also tells Lakshmi that she can throw this torn chunri away and use the new chunri as it is very branded and exclusive.

Further, Rishi asks Lakshmi whether she was expecting some other gift from Rishi instead of the 'kangan'. Lakshmi tells him that she expected him to gift her the love band.

Suddenly, Malishka comes there and tells Lakshmi that Virendra is calling her. Rishi sees the love band in Malishka's hand which Lakshmi was expecting to be gifted to her. Rishi tells Malishka to leave them alone to avoid Lakshmi from seeing it on Malishka's hand.

Later, Lakshmi's uncle tells Lakshmi that he thinks there is something more than friendship between Rishi and Malishka. Lakshmi explains to him that in the city people dancing and being together is normal. So, he doesn't need to worry about anything about Rishi and Malishka.

Meanwhile, Rishi tells Malishka to take off the love band he has gifted her so that Lakshmi doesn't see it.

On the other hand, Virendra comes there and hugs Lakshmi saying that she is his daughter first and then Rishi's wife. Gurucharan, Lakshmi's uncle gets happy seeing the bond between Virendra and Lakshmi.