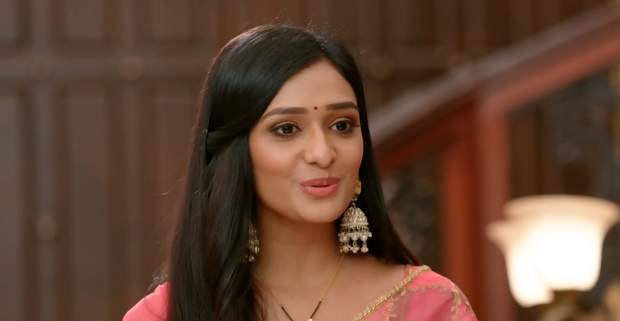 Today's Bhagyalaxmi 20 November 2021 episode starts with Lakshmi and Rishi sharing a good time together on the balcony.

Rishi asks Lakshmi whom does she like. Lakshmi takes everyone's name except Rishi's name.

Lakshmi tells Rishi that he is a reason for her existence, he is the most important thing in her life. So, Lakshmi doesn't like him instead loves Rishi.

They both hug each other. Ayush sees and but leaves from there without disturbing them.

Ayush sees Karishma going to Rishi's room and stops her by keeping her busy with him by saying that he went through a breakup and needs her time.

Karishma tells this to Neelam who suggests Karishma get Ayush married to the girl Ayush likes.

On the other hand, Lakshmi scolds Rishi for keeping a wet towel on the bed.

While removing the towel, Rishi and Lakshmi bang their heads. Lakshmi does it again. So, Rishi asks Lakshmi in surprise that why did she bang her head to him again.

Lakshmi tells him that it's an old saying to bang the head twice or a black dog might bite them. Rishi makes fun of this and they both laugh hard.

Further, Ayush goes to Virender for help and Virender somehow saves Ayush from Neelam and Karishma.

The next morning, Lakshmi open all the curtains on the window. The sunlight disturbs Rishi's sleep.

So, Lakshmi keeps her hand in between to let Rishi sleep in peace.

Suddenly, Rishi wakes up and sees her doing this.

© Copyright tellybest.com, 2020, 2021. All Rights Reserved. Unauthorized use and/or duplication of any material from tellybest.com without written permission is strictly prohibited.
Cached Saved on: Thursday 2nd of December 2021 12:41:56 AMCached Disp on: Monday 6th of December 2021 01:52:02 AM