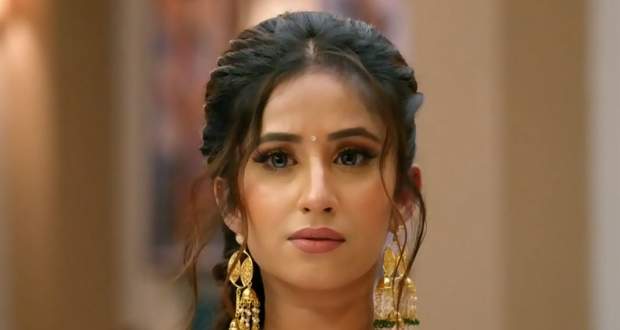 Today's Bhagyalaxmi 20 October 2021 episode starts with Karishma looking at the anniversary cake and deciding to do something so that the cake falls from Lakshmi's hand and it ruins the party.

Karishma tells Malishka to bring another cake to save the day and everyone will be impressed by her.

Further, Malishka tells Neelam that it is time to cut the cake and also says that cake cutting is the most important event on the anniversary.

Everyone gets ready for the cake cutting ceremony and Lakshmi goes to bring the cake.

While Lakshmi is bringing the cake, Karishma pushes the cake on the ground. Lakshmi comes to tell Malishka and ask for help and sees the love band on Malishka's wrist.

Rishi comes there and tells Lakshmi that he gave Malishka his love band as it was a single piece and shows his hands without the love band on it.

Malishka gets upset and tells Karishma that Rishi took off the love band given by her which makes her feel terrible.

Meanwhile, Lakshmi tells Rishi that the cake is ruined. Rishi orders a new cake from his hotel and they decide to keep the guests busy for half an hour.

Suddenly, Neelam's father comes to the party to everyone's surprise. He tells that Lakshmi requested him to come and that's why he has come.

Neelam feels bad that her father gave so much importance to Lakshmi.