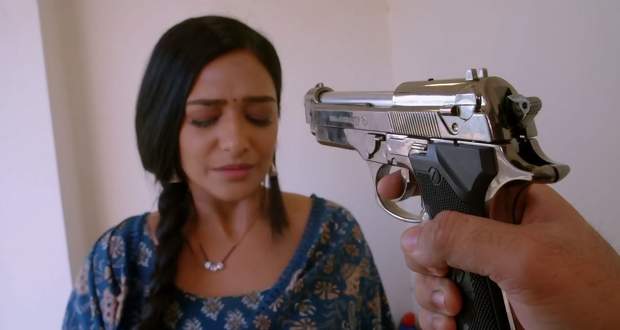 With the help of the bank manager, the police make the blueprint of the bank.

On the other hand, the robber's boss is furious with Lakshmi after he finds out that she sent out a video seeking help.

When the female robber goes to open the locker, they realize that they have been given the wrong key.

At the same time, the police officer communicates with the robber's boss. The boss demands the locker key and threatens to kill the hostages otherwise.

Though the situation is tragic, Malishka's priority lies in Rishi opening a joint account with Lakshmi.

Rishi explains to Malishka that his friend's brother working there needed to complete his target and he just wanted to help him.

Satisfied by Rishi's answer, Malishka leans on Rishi's shoulder while Rishi's mind is constantly thinking about Lakshmi's safety wherever she is hiding.

Elsewhere, Lakshmi is unstable worrying about Rishi and tells Shalu that she wants to be around Rishi to make sure he is safe.

Suddenly, the robbers come there and take them out from the hideout.

When the boss points a gun at Lakshmi, Rishi loses his calm and fights with the boss.

Seeing that Rishi is hard to dominate, the other robber gets hold of Lakshmi and keeps a knife on her neck.

For Lakshmi's safety, Rishi backs off as the knife's pressure makes a wound on Lakshmi's neck.

Lakshmi's flowing blood makes Rishi's heartache and his eyes fill with tears and pain for her.

The infuriated boss tells Rishi that he has to choose between Lakshmi and Malishka.

When the boss says that only the one Rishi selects will live, Malishka gets terrified as she could see Rishi constantly looking into Lakshmi's eyes.