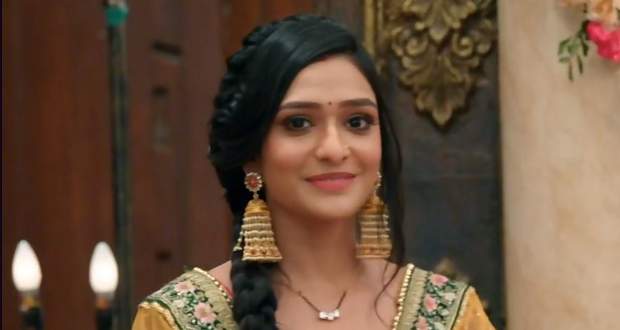 Today's Bhagyalaxmi 21 October 2021 episode starts with Rishi's Nanaji asking Rishi how does he want Lakshmi to match his level.

Malishka comes in between and suggests cutting the cake first but Nanaji gets angry and says when he speaks no one should talk in between.

Rishi says he wants Lakshmi to dance with him. They both perform a romantic dance after which Rishi tells Lakshmi that the new cake has arrived.

Further, Lakshmi comes with the cake in her hands. Malishka will look at the cake in shock while Karishma will say she had ruined the cake how come Lakshmi brought another cake.

Everyone praises Lakshmi for making great preparations for the anniversary party.

After the party, Ayush requests Rishi to let him come late to the office but Rishi makes fun of him telling him to come earlier than always.

Lakshmi comes there and thanks Rishi for helping her in bringing a new cake. Malishka overhears them and gets angry.

Rishi sees her and runs after her. Rishi somehow stops her and asks her why is she angry. Malishka tells Rishi that everyone is impressed by Lakshmi and Rishi is also showing concern towards her.

At the same time, Lakshmi comes there and hears some voices. Lakshmi says that she knows someone is hiding behind the pillar and starts walking towards them.