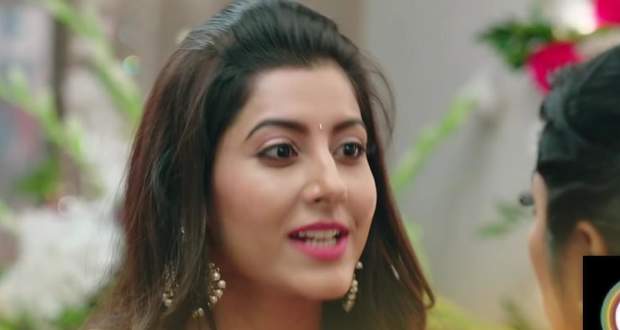 In the morning, Rishi accidently breaks the glass and looks for Lakshmi but gets shocked seeing her making laddos.

He asks her why she's making sweets at 4 in the morning while she she's been awake since 2 to make the Bhog for all the guests.

She slips and is about to fall but Rishi holds her and leaves afterwards thinking what's wrong with him.

Further, Lakshmi gives the Pooja things to Panditji and takes care of all the housemates as Neelam, Karishma and Malishka look on.

Lakshmi's family comes and Rishi greets them while Karishma tells Neelam that the pooja should be done by Malishka's hands.

Meanwhile, Lakshmi sets Rishi's hair properly with his permission while Malishka gets jealous and gives her the plate of sweets to give to the priest.

The pooja starts and Mahendra sends Bani with Malishka to do the aarti failing Karishma's plan and later Lakshmi and Rishi do the aarti together.

Dadi and Mahindra hope that Rishi and Lakshmi unite while Rishi feels guilty to put Lakshmi through everything.

Rishi is praying to God to remove love from Lakshmi's heart while she slips and holds his hand for support.