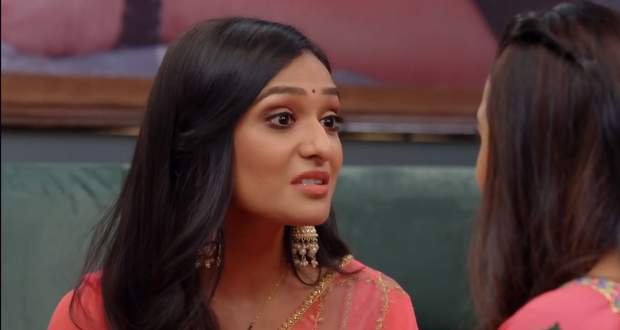 Today's Bhagyalaxmi 22 November 2021 episode starts with Rishi waking up in the morning and wishing Lakshmi Happy New Year before leaving for office.

On the other hand, Malishka is still angry as Rishi didn't call her last night.

Viraj calls Malishka to ask if she is fine and also asks her to give him an event handler's number.

Rishi tries calling Malishka but at the same time, he sees Lakshmi working. So, Rishi asks Lakshmi to just rest as she is not well.

While Rishi is talking to Neelam, Shalu comes there to meet Lakshmi. On her way to Lakshmi's room, Shalu bumps into Ayush. Ayush tries to tease Shalu which ends up in an amorous moment between them.

Devika comes there and teases Ayush but he somehow avoids the topic and tries to run from there.

Sonia sees this and scolds Devika saying she should not force Sonia to remind her that Devika is not her real sister.

In Lakshmi's room, Lakshmi tells Shalu that she made a mistake by doubting Rishi as Lakshmi is the only one in his life.

Meanwhile, Rishi reaches Malishka's house and says that he loves her as soon as she opens the door.

Rishi tries to explain to Malishka that the circumstances couldn't let him call her. Malishka and Rishi continue arguing when a servant comes and hands over Malishka's bag to her.

Malishka tells Rishi that she is going to meet Viraj.

© Copyright tellybest.com, 2020, 2021. All Rights Reserved. Unauthorized use and/or duplication of any material from tellybest.com without written permission is strictly prohibited.
Cached Saved on: Thursday 20th of January 2022 03:43:13 AM