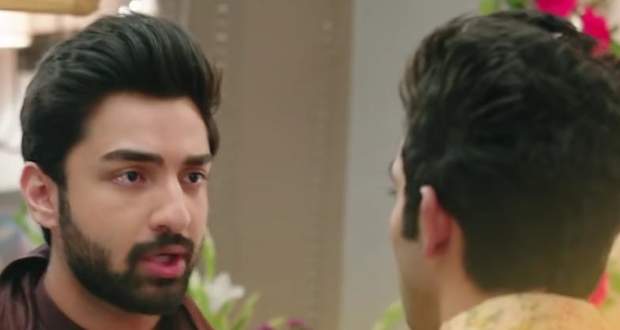 Today's Bhagyalaxmi 22 September 2021 episode starts with Rishi praying to remove love from Lakshmi's heart for him while she slips and holds onto him for support leaving his prayers incomplete.

Malishka tries to take the tray of Laddoos to distribute but Lakshmi stops her saying that she is a guest and distributes Laddoos to the guests.

The guests praise the Laddoos and Neelam proudly says that they are made by her daughter-in-law Lakshmi making Malishka angry.

Malishka goes to her room while Karishma goes after her and tries to calm her when Ahana overhears them.

Virendra goes to Neelam and tells her how the guests are praising Lakshmi and tells her that they should ask Malishka to go back to her house.

Rishi thinks about Lakshmi and tells Aayush to give the glass of juice to Lakshmi who drinks the whole glass upon leading that Rishi has sent it for her.

Shalu and Bani look on while Shalu compliments Aayush leading Bani to tease her.

Meanwhile, Neha tells Rano that it has become easy for her to trap Rishi as all the fights and arguments happen after marriage.

Later, Neha talks to her friend on call and lies to her that she is there for Aayush while Shalu overhears and thinks to save him.

Rishi is looking at Lakshmi working while Aayush come there and teased him which makes him angry and he leaves.

Aayush goes after him and tells him that Lakshmi is a good girl but he is in love with Malishka.

Further, Neha accidentally collides with Aayush while Shalu sees them and angrily separated them while telling Aayush to leave from there.

Meanwhile, Rishi goes to his room and thinks of Lakshmi seeing her things and tells him that he doesn't love Lakshmi.

However, Neha overhears him and happily hugs him saying that she knew he loved her and not Lakshmi when Malishka comes there and slaps her.