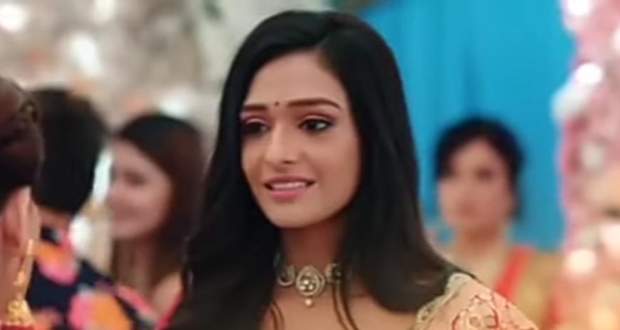 Today's Bhagyalaxmi 23 August 2021 episode starts with Sanjay stopping the car on the way to Oberoi Radiant. He says that the car is not working but secretly waits for Balwinder and his goons to come and kidnap Lakshmi.

Pragya from Kumkum Bhagya comes there and offers a lift to Lakshmi and others.

Meanwhile, Neha has locked herself in a room and is going to attempt suicide. Rano stops her and promises that she won't let Lakshmi marry Rishi.

On the other hand, Lakshmi invites Pragya to her wedding.

At the parking lot, Balwinder and his goons disguise themselves as Kayyam chacha and his band, who are the musicians for the marriage.  Abhi sees them, but they refuse to recognize him making him suspicious. So, he follows them to the wedding.

Meanwhile, Neha and Rano plan to make Neha sit for the marriage with Rishi in place of Lakshmi.

At the wedding, Pragya and Abhi argue but then accompany Rishi and Lakshmi in dancing.

Later, Rishi's mother asks Lakshmi to get ready for the wedding.