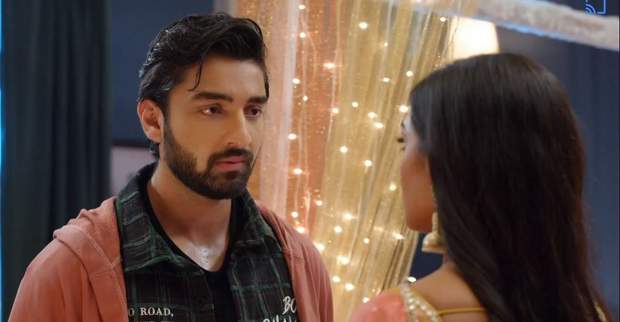 Today's Bhagyalaxmi 23 December 2021 episode starts with Lakshmi telling Rishi that she felt scared after seeing the wedding card with his and Malishka's name.

Further, Lakshmi gets wet by the rain while trying to close the window.

When Lakshmi dries her hair, the water splashes on Rishi and he makes her pat him dry.

Suddenly, the electricity goes. Lakshmi bumps into something and falls on the bed with Rishi.

On the other hand, Malishka is busy making preparations for her wedding with Rishi.

Malishka thinks that if Lakshmi comes to know about her and Rishi's marriage then she will know her place in Rishi's life and also the Oberoi family will accept her.

Malishka says that she has planned out how to keep Lakshmi in Rishi's life to get rid of the Markeshdosh in Rishi's Kundli.

Meanwhile, Rishi and Lakshmi share a funny moment after which Rishi sees that Lakshmi's old wound has started giving her pain again.

Rishi scolds Lakshmi for not taking care of herself while applying first aid to her wound.

Lakshmi says that she can bear any pain but not the pain of Rishi being angry with her.

Further, Rishi asks Lakshmi to go to sleep when Malishka texts him but he does not reply to her.

The next morning, Lakshmi sees someone taking Rishi away from her in her dream.

Lakshmi wakes up crying and calling out for Rishi. Rishi comes to her and tries to calm her.

Upcoming Bhagyalaxmi episode updates: Neelam and Lakshmi try to stop Rishi from going out for the day.

© Copyright tellybest.com, 2020, 2021. All Rights Reserved. Unauthorized use and/or duplication of any material from tellybest.com without written permission is strictly prohibited.
Cached Saved on: Wednesday 19th of January 2022 02:26:04 PM