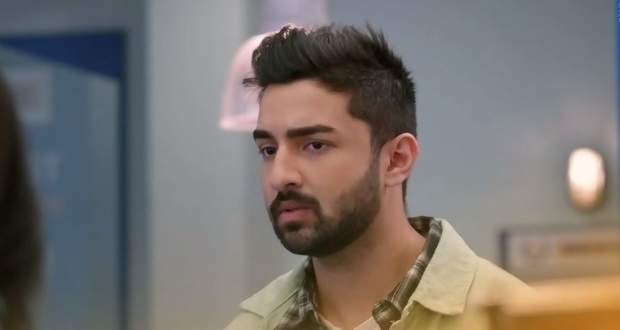 Today's Bhagya Laxmi 23rd February 2022 episode starts with Rishi coming out of the bank to take the locker key as instructed by the robbers who have kept Lakshmi hostage at gunpoint.

Seeing Rishi, Neelam finds back her breath. Karishma and Virendra are overwhelmed to see Rishi but are still worried for Ayush and Lakshmi.

Further, Rishi claims to be the one who will be giving the locker key to the robbers, Neelam refuses to let Rishi go back in.

Though Neelam tries her best to stop Rishi, he walks into the bank saying that he has to return to save Lakshmi’s life.

After getting the locker key, the robbers get hold of all the cash and jewelry in the lockers.

Narcissistic Malishka is worried about her wedding jewelry getting robbed while everyone’s life is at stake.

At the same time, officer Rakesh Singh makes a call to the robbers demanding the release of the hostages.

The robbers’ boss demands three cars in which they’ll escape along with the hostages and assures him to set free the hostages after a point.

Rakesh Singh is given five minutes to arrange for the cars however, the officer has other plans.

To deal with the robbers, Rakesh Singh decides to enter the bank with one team while the other keeps an eye on the front door of the bank.

In the meantime, the boss decides to make a move and comes out of the bank with his team and the hostages with masked faces.

The boss gives a note to Mr. Singh which states that the people holding guns include hostages also and any smart move by the officer and his team will cause the lives of the hostages.