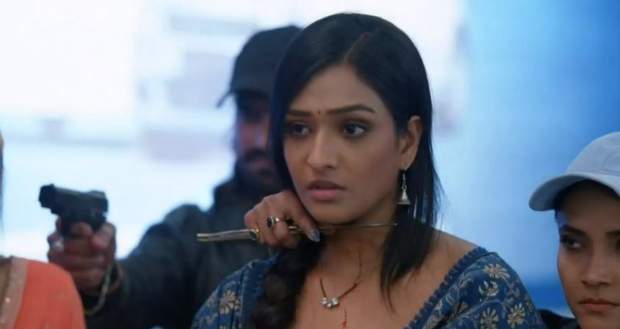 Today's Bhagya Laxmi 24th February 2022 episode starts with Lakshmi signaling the officer about the positions of the robbers.

Rakesh Singh fires a bullet in the air.

In a flashback, it is shown how smartly Rishi instructs everyone to bend down if any bullets are fired and throw the sand on the robbers.

The robbers' boss points the gun towards Malishka but Rishi pushes him to the ground.

Suddenly, Lakshmi notices that the boss is firing a bullet at Rishi and runs to save his life.

Lakshmi's efforts go in vain as the bullet hits both of them.

Rishi and Lakshmi fall on the ground looking into each other's eyes while they are covered with blood.

While Rishi sees his life moving towards an end, he recalls the beautiful moments he has cherished with Lakshmi.

In his mind, he narrates the poem he claims to be written for Malishka.

When Rishi completes the narration, he is definite that the poem describes his feelings for Lakshmi.

Lastly, Rishi says 'I Love You' with plenty of love but unfortunately his words do not reach his lips and he falls unconscious.

Later, Rishi and Lakshmi are taken to the hospital and their operations begin.

Ayush sees how Rishi's family is consoling each other and thinks that Shalu must be alone.

So, Ayush goes to Shalu and calms her down.

At the same time, Baani arrives there. Seeing her cry after looking at Lakshmi's condition, Ayush cheers her up saying her smile is Lakshmi's strength.

Suddenly, the doctor informs that Lakshmi is out of danger.

Unfortunately, on the other hand, Rishi's condition is critical.

Meanwhile, Lakshmi's innocent heart and pure love are seen when her first words after getting back into consciousness are 'Rishi! Is Rishi fine?'