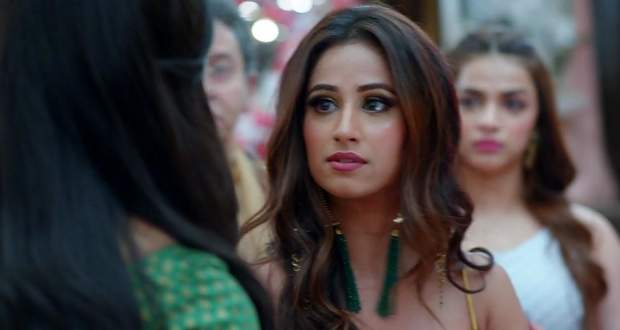 Today's Bhagyalaxmi 24 September 2021 episode starts with Neelam and Virendra coming to Lakshmi and talking to her about Ganpati Visarjan while Lakshmi remembers her parents and gets emotional.

Neelam leaves while Virendra hugs Lakshmi saying that he is her father only and comforts her.

She tells him that her father would be happy to see her having such a happy family and a loving family while Rishi overhears their conversation and starts thinking.

Neha tells Rano that she will prove to Lakshmi that her marriage was a namesake marriage after getting proof and Rishi and Malishka's affair while Aayush overhears them informs Rishi of the same.

Later, Neha shows Malishka to Rano and tells her that Rishi wants to do the pooja with her but will not due to her seeing them.

Rishi does the pooja with Lakshmi while Neelam announces that Rishi and Lakshmi will do the Ganpati Visarjan this year which angers Malishka even more.

Malishka leaves from there and goes to her room followed by Karishma while Rishi notices her and thinks that she is angry.

Krishna questions her while Malishka reveals that she can't bear to see Lakshmi showering love on Rishi and is leaving from there.

Karishma asks her if she informed Rishi while she replies that Rishi will know by the look she gave if he loves her.

Rishi asks Aayush to manage Neha and he leaves while Neha goes after him as Shalu stops Aayush from following her.

Malishka gets happy seeing Rishi and hugs him while Karishma turns away.

Neha comes there and sees them hugging followed by Aayush.

© Copyright tellybest.com, 2020, 2021. All Rights Reserved. Unauthorized use and/or duplication of any material from tellybest.com without written permission is strictly prohibited.
Cached Saved on: Tuesday 2nd of August 2022 02:57:44 PMCached Disp on: Thursday 11th of August 2022 04:56:22 AM