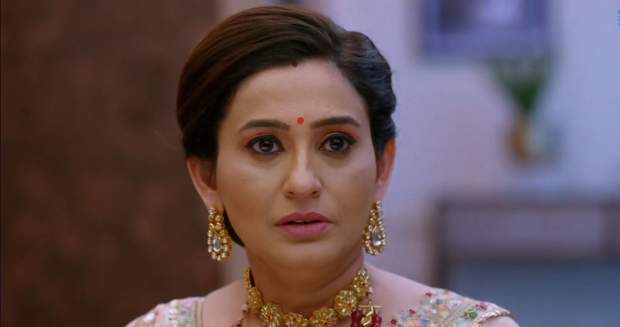 Further, Malishka returns to Rishi's cabin and sees him with Lakshmi.

On the other hand, Neelam asks the family Panditji to visit them to check Rishi's kundali.

Virendra tries to explain to Neelam that Lakshmi will take care of Rishi.

At the office, when Lakshmi arranges some papers fallen on the floor, the projector powers on which shows Rishi and Malishka's picture on the screen.

Lakshmi tells Malishka that she is getting a bad feeling similar to the one she had on the day of Karwachauth.

Suddenly, Lakshmi remembers that Rishi has removed his wedding ring and chain on Karwachauth's day.

When Lakshmi asks Rishi about it, Rishi says that he removed them as he was angry with Lakshmi.

Malishka says that she has important work and has to leave.

Lakshmi gets up to see off Malishka when Rishi hugs her to avoid her from seeing the picture on the screen.

Malishka powers off the projector.

Further, Lakshmi requests Malishka to ask Rishi to return home soon but Malishka says that Rishi has important work at her house.

Later, Rishi takes Lakshmi to the hospital to bandage her injured leg.

When Lakshmi returns home, Sanjay informs her that a Panditji has come home and whenever he comes something huge happens in the house.

© Copyright tellybest.com, 2020, 2021. All Rights Reserved. Unauthorized use and/or duplication of any material from tellybest.com without written permission is strictly prohibited.
Cached Saved on: Friday 21st of January 2022 04:06:00 PM