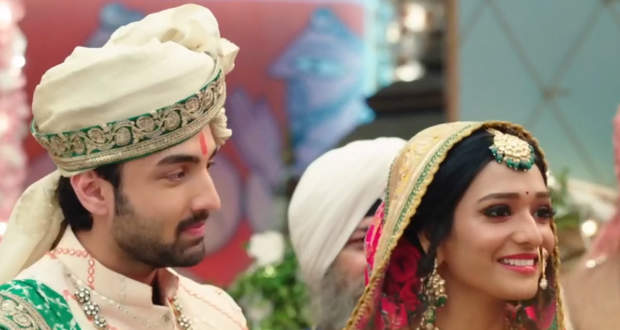 Today's Bhagyalaxmi 26 August 2021 episode starts with Rishi asking Lakshmi whether she loves him or not. He asks her to nod her head in Yes or No. Before she answers, Rishi's friends take him with them.

On the other hand, Balwinder is arrested and taken to the police station for attempting to kidnap Lakshmi. There he tries to bribe the inspector but the inspector beats him up.

Later, Rishi comes back to Lakshmi but they are again interrupted by Rishi's sister. She asks them to come to the reception hall.

At the hall, as the 'Shubh muhurta' of the wedding is postponed, everyone celebrates Rishi and Lakshmi's reception.

Meanwhile, Neha gets jealous seeing Rishi and Lakshmi dancing together in the reception. Rano tells Neha to disguise herself as Lakshmi to get married to Rishi.

Further, Preeta and Karan from Kundali Bhagya arrive at the wedding with their family.

At the same time, Balwinder and his goons escape from the jail.