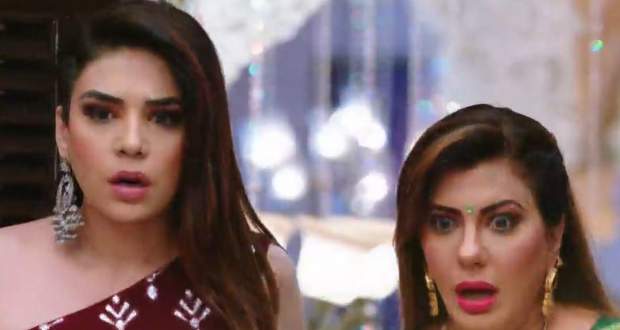 Today's Bhagyalaxmi 27 August 2021 episode starts with Srishti taking a selfie such that Neha also gets captured in her selfie along with her lehenga.

Later, Srishti sees that Lakshmi is also wearing the same lehenga and suspects that Neha is up to something bad. Srishti tells Sammy and Rakhi about this. So, Sammy goes to check why Neha has the bride's duplicate lehenga.

Meanwhile, Balwinder and his goons disguise themselves as housekeepers and enter the wedding.

On the other hand, Sammy sees Neha with the lehenga and asks her why she has the duplicate lehenga. Suddenly, Rano comes there and handles the situation.

Further, Rano tells Neha that if anyone sees two brides wearing the same lehenga then there will be a lot of chaos. She says that she will make Lakshmi come inside the make-up room and then hit on her head and will make her unconscious.

Later, Rano brings Lakshmi to the room by giving some excuse. Neha brings a bat to hit on Lakshmi's head. Suddenly, Rakhi comes there and sees the bat in Neha's hand. She tells that she saw a boy crying and telling about the bat autographed by her son, Karan. She takes the bat from Neha to return it to the boy.

Neha goes to Lakshmi's room and hits a flower vase on her head. Lakshmi falls to the ground and goes unconscious.

© Copyright tellybest.com, 2020, 2021. All Rights Reserved. Unauthorized use and/or duplication of any material from tellybest.com without written permission is strictly prohibited.
Cached Saved on: Thursday 27th of January 2022 02:42:30 PM