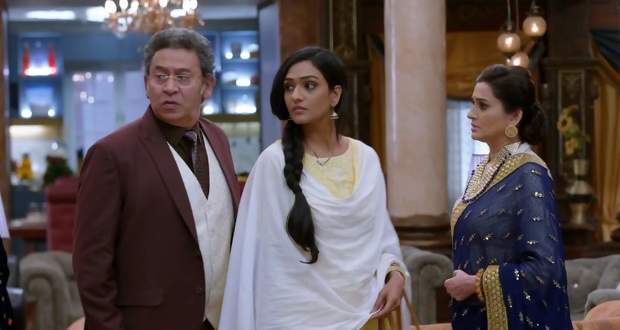 Neelam says that if she is concerned for Virendra then she should return to the Oberoi mansion.

At the same time, Rishi arrives there and hears Lakshmi saying that she has broken ties with him.

So, Rishi says that Lakshmi does not share any relationship with him or his family but she does care about the money.

Rano comes along with Rishi and tells everyone that she has sent Lakshmi with the papers.

As Lakshmi is unaware of what those papers are about, she gives the papers to Rishi with her own hands.

Rishi asks Lakshmi to read it but when she walks away, Rishi reads it himself.

Hearing this, Lakshmi gets shocked and Ayush realizes that she has not issued the divorce papers.

Further, Rano asks the Oberois to ask Rishi to stop misbehaving and give them the money.

When Virendra and Ayush try to speak in between, Rishi asks them not to interfere.

Rishi brings a bag filled with money and pours it out in front of Lakshmi.

Lakshmi picks up the money and throws it back on Rishi's face. She asks him to return her the time she loved him and asks him the cure for the wound he has given her.

After, seeing the drift between Lakshmi and Rishi, Ayush threatens to kill Rano and asks her to confess the truth.

When Rano says that Lakshmi didn't know anything, Lakshmi says that Rano did the right thing but she should have not asked for money.

Further, Rishi says that even he breaks all his ties with Lakshmi. Lakshmi repeats the same and they both walk away in different directions.