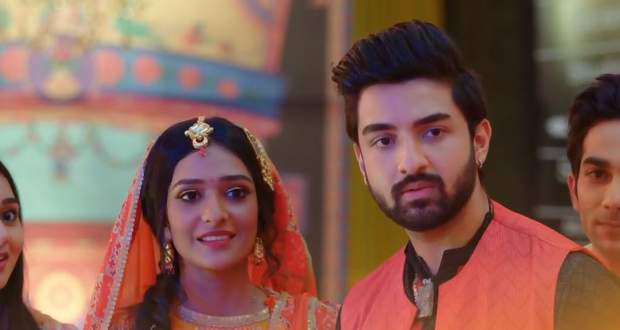 Today's Bhagyalaxmi 27 November 2021 episode starts with something getting into Lakshmi's eyes because of the breeze.

Rishi takes Lakshmi to a corner and blows on her eyes to remove the dirt.

Lakshmi and Rishi start laughing as Rishi blows air on her face. Malishka sees this and leaves from there in anger.

Lakshmi tells Rishi that she knows Malishka is very angry with Rishi as Lakshmi has come into Rishi's life.

Rishi tries to tell Lakshmi that it is not like that. Lakshmi says that she'll leave Rishi for Malishka.

Rishi thinks Lakshmi is talking about separating from him.

Lakshmi says that Malishka has been his great friend but since his marriage with Lakshmi, Rishi is busy with Lakshmi.

So, Malishka is upset with Rishi.

Lakshmi requests Rishi to spend time with Malishka so that she won't be upset and angry with Rishi.

Seeing Lakshmi's pure intentions, love, and respect for him, Rishi asks Lakshmi why didn't she come into his life earlier.

Rishi and Lakshmi clean each other's tears. Malishka sees this and goes towards Viraj so that she can make Rishi jealous.

Viraj's grandfather sees Malishka and Viraj together and thinks that they are dating. He informs Malishka's father about this.

As Shalu was also there, she says that Shalu also thinks that Viraj and Malishka like each other.

Further, the songs are played and everyone starts dancing.

Rishi gets closer to Lakshmi as Malishka tries to make him jealous by going closer to Viraj.

© Copyright tellybest.com, 2020, 2021. All Rights Reserved. Unauthorized use and/or duplication of any material from tellybest.com without written permission is strictly prohibited.
Cached Saved on: Thursday 20th of January 2022 04:30:57 AM