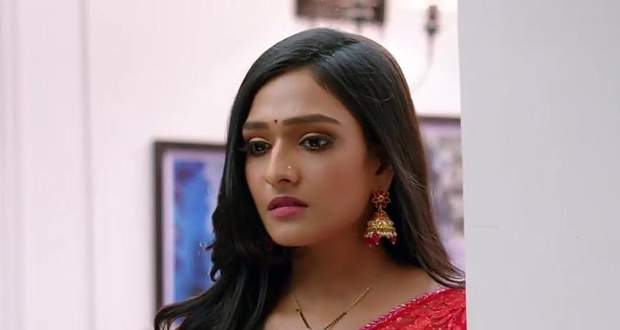 Today's Bhagyalaxmi 27 October 2021 episode starts with Rano and Nisha joking that Lakshmi is going to disappoint the Oberoi family by breaking the fast.

Meanwhile, Dadi encourages Lakshmi while giving her items for the Karvachauth.

Lakshmi sees Rishi and recalls the last moments while he tries to talk to her but Dadi takes Lakshmi with her.

Dadi gives her the ancestral ring while Rishi comes there and tells Lakshmi that she won't keep the fast for him while scolding Dadi that she is doing this after knowing everything.

Lakshmi gets suspicious and questions them while they stand nervous.

Elsewhere, Karishma overhears Ahana and Devika showing concern for Lakshmi and plans to use it against her.

Rishi tries to make up excuses in front of Lakshmi while Neelam comes there and says that Lakshmi will keep the fast Rishi and tells him to support her.

Rishi goes to his room and calls Malishka to cancel their club night plan for the next night but Malishka doesn't pick up his calls as she is sleeping.

The next morning, Neelam says that Lakshmi's Sargi hasn't arrived yet and thinks to give it to Lakshmi herself while Rano makes excuses to his husband for not being able to send the Sargi to Lakshmi.

However, Shalu and Bani reach the Oberoi house to give Sargi to Lakshmi and chat with her.

After Neelam and Dadi leave, Lakshmi praises Shalu for having grown up and says that she knows Shalu made the Sargi for her and not Rano.

Bani informs them that she overheard Rano and Neha planning to ruin her Karvachauth by not sending her Sargi.