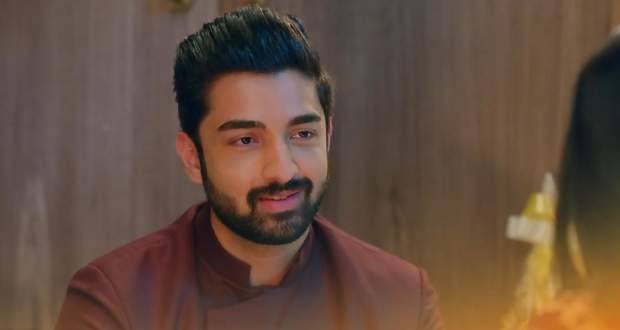 Today's Bhagyalaxmi 27 September 2021 episode starts with Aayush dropping Rano and the family at their house while Rano tells Neha to invite him inside and trap him.

Meanwhile, Rishi tells Malishka about Lakshmi finding out about the dinner date and tells her that he will manage the dinner for Lakshmi as she does so much for him anyway.

Rishi thinks about Lakshmi and tells the servant to decorate his room for candlelight dinner while Karishma overhears him.

Shalu bickers with Aayush and he teases her by asking her if she likes him while she refuses and leaves from there.

Karishma confronts Rishi as to why he is having a candlelight dinner with Lakshmi while he says that even though he loves Malishka, he cannot hurt Lakshmi's feelings as she is a genuine girl and tells her that she won't understand and leaves.

However, Karishma says that she knows he has started liking Lakshmi but doesn't know it himself.

Later, Lakshmi is planting the tulsi plant while Rishi comes there and helps her while she asks him why he is stressed.

He tells her that he did wrong with someone and she tells him to apologize while he asks her if she will forgive him which confuses her.

Elsewhere, Shalu gives the tea to Aayush and stomps on his feet which leads to Rano scolding Shalu as Aayush praises the tea's flavor.

Rishi recalls Neelam giving her a swear to not inform Lakshmi about his markesh dosh and diverts the topic in his conversation with Lakshmi.

He apologizes for being distant while she gets emotional and he consoles her.