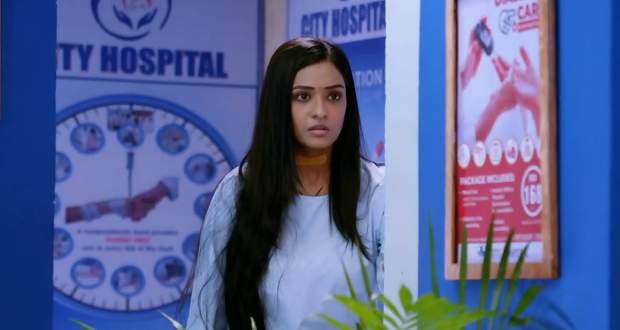 Today's Bhagya Laxmi 28th February 2022 episode starts with Neelam Oberoi blaming Malishka for bringing Rishi to death’s door. She further adds that it is only due to Lakhsmi’s effort that Rishi is still alive.

Later, she tells Malishka no matter how profound her love for Rishi, she prefers for Lakshmi, his savior, to be his wife.

Neelam's words shock Lakshmi and she leaves the corridor.

Meanwhile, Preetam holds Rano from going to Lakshmi, however, Lakshmi soon returns and without answering Rano keeps walking, leaving them to follow.

Later, the doctor announces Rishi to be critical and asks Neelam to pray for his life.

Hearing that, Neelam and Panditji go into ICU to bless him where she tearfully asks Rishi to wake up.

At the house, Rano and Neha try to get a reaction from Lakshmi by insulting her but she remains quiet and goes into her room.

However, Preetam sympathises with Lakshmi which instigates Rano again.

Virendra feels disappointed at Lakshmi’s leaving and goes to pray. He worries for Rishi’s safety and seeks assurance from Ayushman.

Later, Lakshmi recalls Rishi’s words from the past and cries incessantly.

Meanwhile, Virendra Oberoi prays for Rishi’s health and seeks forgiveness for his past behavior with Rishi.

Outside ICU, in the corridor, Neelam tells Malishka about her decision to bring Lakshmi back.

Malishka tries to convince Neelam and goes to ICU to wake Rishi.

Later, the doctor insists upon the graveness of Rishi's condition and asks them to take hope.

While Neelam is going to get Lakshmi back, Malishka’s mother stops and threatens Neelam with Rishi never seeing Malishka again.

However, Neelam carries on, worrying for Rishi’s safety only.