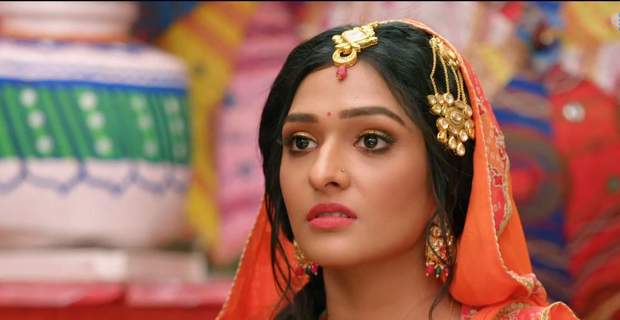 Today's Bhagyalaxmi 29 November 2021 episode starts with Viraj dancing at his grandfather's party. Malishka hoots for him to make Rishi jealous and hugs him after he comes back.

Rishi asks Lakshmi to dance with him. They both set the stage on fire with their romantic performance.

Malishka and Viraj join them and both the couple dance along. While they switch partners, Rishi and Malishka make each other angry by praising their partners.

After the dance, Malishka says the dance can't be completed without Fugdi.

Malishka invites Lakshmi to dance with her. Rishi gets worried as he thinks Malishka will try to hurt Lakshmi. Lakshmi assures Rishi that she'll be safe.

Malishka and Lakshmi start playing Fugdi. After speeding up, Malishka purposely leaves Lakshmi's hand to make her fall but Rishi comes and saves Lakshmi from falling.

Ayush looks angrily at Malishka. Ayush texts Malishka and warns her that if she ever tries to hurt Lakshmi he won't spare her.

Malishka and Viraj go away from everyone where Malishka asks Viraj to explain to his grandfather that they don't want to get married.

On the other hand, Kiran tells Viraj's grandfather that they should have asked Viraj and Malishka before announcing their marriage.

Meanwhile, Rishi gets angry at Viraj for acting like a couple with Malishka which eventually led to their engagement being announced.

Viraj asks Rishi why is he behaving like he is Malishka's boyfriend or lover.

© Copyright tellybest.com, 2020, 2021. All Rights Reserved. Unauthorized use and/or duplication of any material from tellybest.com without written permission is strictly prohibited.
Cached Saved on: Friday 21st of January 2022 05:34:43 PM