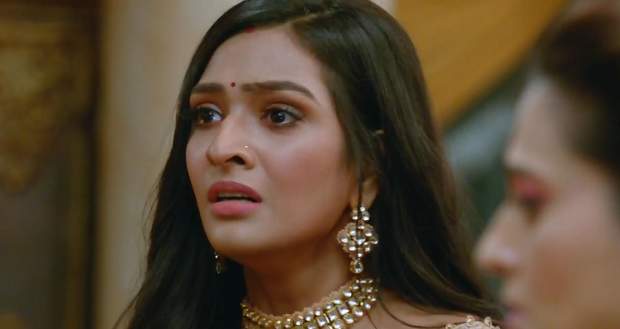 Today's Bhagyalaxmi 29 September 2021 episode starts with Rishi telling Malishka that he likes her because of her possessiveness and flirts with her while Ahana and Devika see them from the second floor and get upset.

He tells her to trust him while she says that she has trust in herself that no guy can ever leave her for someone like Lakshmi.

Further, he tells Lakshmi to not wait for him as he will be working late.

The next morning, Rishi comes to the office while Aayush tells him that their manager is taking maternity leave and tells him to interview the candidate he chose for the post of manager.

Meanwhile, Karishma tells Malishka on call that she liked how she reacted the previous night after which Ahana tries to convince Karishma to support Lakshmi but gets scolded instead.

Malishka calls Rishi and his call is showed as busy after which she tells him to say I love you to her five times.

However, their call gets disconnected and Rishi gets a call from Lakshmi and he says I love you into the phone without noticing it is Lakshmi instead of Malishka.

He tells her to say it back which makes Laskhmi flustered while Rishi realizes that it is Lakshmi.

Dadi calls for Lakshmi and she disconnects the call and leaves while Rishi goes back to work.

The candidate enters Rishi's office and introduces herself as Shanaya Thakur while Rishi she's her profile and tells her that she is not fit for the position they are hiring and tells her to leave.

However, she tries to get intimate with him and he throws her out of the office and has her taken out of the building by guards.

Later, Rishi is giving a presentation while they hear the commotion of the media outside as police comes there and takes Rishi with them saying that Shanaya has filed a molestation case against him.

© Copyright tellybest.com, 2020, 2021. All Rights Reserved. Unauthorized use and/or duplication of any material from tellybest.com without written permission is strictly prohibited.
Cached Saved on: Wednesday 13th of October 2021 09:48:45 AMCached Disp on: Thursday 21st of October 2021 07:49:22 PM