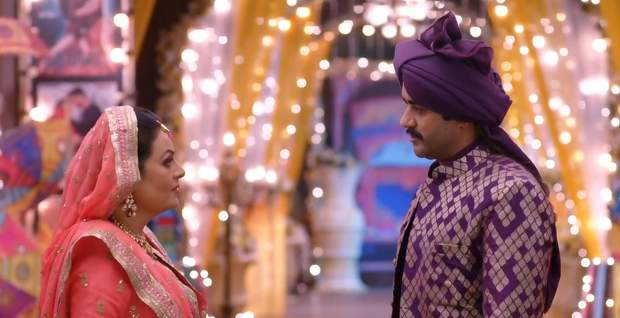 Today's Bhagyalaxmi 2 December 2021 episode starts with Malishka telling Lakshmi that it is great that she found out the truth. Rishi says sorry to Lakshmi for hiding everything from her.

Lakshmi tells them that why are they so tense. Lakshmi also asks Malishka to come with her and takes Malishka in front of everyone.

Viraj asks Malishka what is her decision for the wedding. Lakshmi says that she heard Malishka telling Rishi that she is very happy with this relation.

Everyone think that Malishka was talking about her and Viraj's relation and they celebrate.

Rishi and Malishka stay shocked as they knew Malishka was talking about her and Rishi's relation.

After returning back from the party, Malishka calls Vriaj and tells him that she is ready for the marriage as she is angry with Rishi.

Further, Rishi acts like sleeping when Lakshmi enters the room. Lakshmi tries to remove his shoes as he is alseep.

Rishi gets up and tells Lakshmi that she should not take care of him as he is not worth it.

While Rishi goes to change to the restroom, Lakshmi talks to herself and says how much she loves Rishi. Rishi hears everything.

Ayush goes to Virendra's room but while trying to wake him up, Neelam gets up. Neelam thinks that there is a thief in the room and asks Virendra to check.

Virendra realizes that Ayush is in his room.

© Copyright tellybest.com, 2020, 2021. All Rights Reserved. Unauthorized use and/or duplication of any material from tellybest.com without written permission is strictly prohibited.
Cached Saved on: Wednesday 19th of January 2022 01:47:30 PM