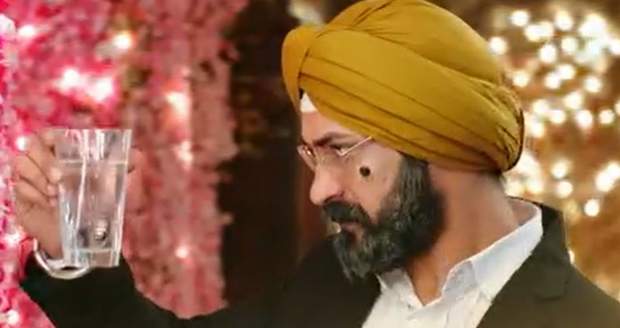 Further, Lakshmi tries to explain to Neha that whatever she is doing is wrong. Neha runs out of the room and locks Lakshmi with Rakhi and Srishti. Suddenly, Preeta comes there and slaps Neha. She ties her up on a chair and takes Lakshmi to the mandap.

At the mandap, Balwinder is shocked to see Lakshmi come for the marriage. He asks his friend to mix something in a drink and offers it to Lakshmi as a drink from Rishi.

At the same time, Sameer tells Karan and Preeta that Balwinder and his friend are planning to kidnap Lakshmi.

On the other hand, Rano is shocked to see Lakshmi and wonders where her daughter Neha is.

Meanwhile, Lakshmi attempts to take a sip of the drink given by Balwinder. Karan sees this and stops her from drinking it.
Balwinder runs away from there but Rishi catches him and beats him up.

Later, Rishi and Lakshmi go to the mandap for the marriage. There panditji asks the bride's parents to come forward for the rasam of Kanyadaan. As Lakshmi's parents are no more, Sarla does Lakshmi's kanyadaan.

© Copyright tellybest.com, 2020, 2021. All Rights Reserved. Unauthorized use and/or duplication of any material from tellybest.com without written permission is strictly prohibited.
Cached Saved on: Friday 28th of January 2022 05:42:04 PM