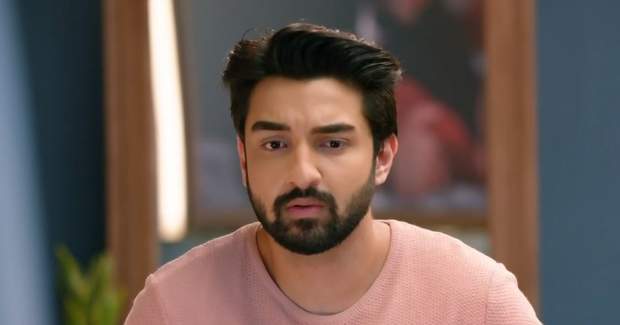 Today's Bhagyalaxmi 3 December 2021 episode starts with Ayush being very excited to tell someone about Malishka and Viraj's marriage.

At the same time, Virendar comes out of his room.

Firstly, he scolds Ayush for interrupting their sleep. Ayush informs Virendar about Malishka and Viraj's engagement and marriage.

Both of them dance in excitement when Neelam comes there.

While they try to explain why they were dancing, Rishi arrives there and asks what is going on there.

Lakshmi comes there searching for Rishi.

Further, Neelam asks Rishi how was the party and Rishi says that they enjoyed it.

Neelam asks Ayush to go to his room and she goes to sleep.

Lakshmi tells Rishi that Viraj had called for him. Rishi goes to his room to callback Viraj.

Rishi asks Lakshmi to come to the room.

In the room, Rishi is unable to find his mobile. Lakshmi finds it in the cupboard.

When Rishi removes the mobile, he accidentally drops lots of things. Lakshmi starts picking them up and asks Rishi to call Viraj.

On the call, Viraj asks Rishi if Malishka has an affair with someone from Rishi's family.

Lakshmi finds the other half of the love band that Rishi gave Malishka saying he only has the single piece.

Meanwhile, Malishka cries looking at the love band that she had thrown but somehow got it back.

Lakshmi shows Rishi the love band and asks how does he have it.

© Copyright tellybest.com, 2020, 2021. All Rights Reserved. Unauthorized use and/or duplication of any material from tellybest.com without written permission is strictly prohibited.
Cached Saved on: Thursday 20th of January 2022 04:29:37 AM