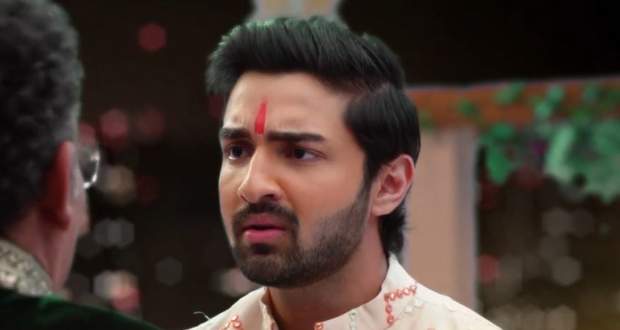 Today's Bhagyalaxmi 3 September 2021 episode starts with Rishi telling that he can not stand Lakshmi. He tells that he will tell Lakshmi that he doesn't love her.

Suddenly, Lakshmi comes there searching for Rishi and sees a drink and cigarette in Rishi's hand. Rishi handles the situation by telling her that the drink and cigarette are his father's. She tries to explain to Rishi's father that all this is not good for his health.

Lakshmi and Rishi go back to their room where Rishi tells Lakshmi about her cabinet and feeds his number in her phone.

Further, he acts of remembering an important work and goes out of the room to avoid Lakshmi.

The next day, Lakshmi gets up early goes for the Pooja. Daadi tells Rishi to do the Pooja along with Lakshmi.

Later, Shalo and Baani call Lakshmi as they missed her. Shalo realizes that Lakshmi is not fine and asks her what was wrong.

At the same time, Neelam comes there and tells Lakshmi to invite her family at 4 pm for a ritual.

Further, Daadi tells Lakshmi to make a sweet dish for the family to impress everyone. Karishma asks Daadi why did she send Lakshmi to the kitchen. Daadi tells her that it's a ritual. Karishma disagrees with her decision and leaves from there. Daadi thinks that Karishma cannot stay happy with anybody.