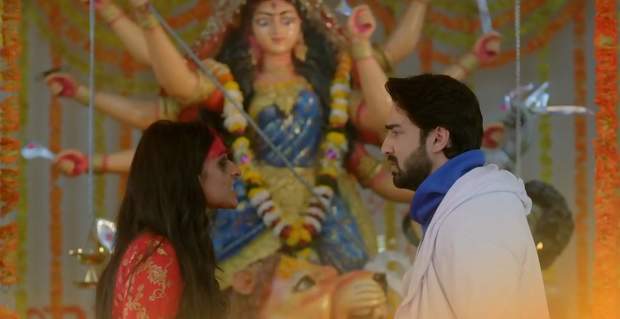 Today's Bhagya Laxmi 4 January 2022 episode starts with Malishka getting a call from Kiran who asks her to come home soon.

Kiran is hiding behind a sofa as someone is throwing stuff all over the house.

On the other hand, Rishi asks Karishma to take Neelam home and runs all the way recalling how bad he has done to Lakshmi and crys.

Rishi bumps into a car and falls unconscious.

When Rishi wakes up, he is overwhelmed to see Lakshmi applying ointment on his wound.

Lakshmi says that she had come to take her belongings but stopped after seeing the wound on his head.

Rishi asks Lakshmi to stay. Lakshmi says that Rishi does not consider her to be his wife then why should she stop.

Lakshmi insists on going when Rishi tells her that he cannot stop himself from loving her anymore.

Lakshmi hugs Rishi when Neelam wakes up Rishi and he realizes he had been dreaming.

Meanwhile, Lakshmi wakes up near a temple. Lakshmi walks up to the idol of the Goddess where the Panditji asks her to do the aarti.

At the same time, the priest who was getting Rishi and Malishka married sees Lakshmi at the temple.

The priest calls Rishi and informs him about Lakshmi's location. Rishi immediately leaves for the temple.

Upcoming Bhagyalaxmi episode updates: Rishi goes to the temple where Lakshmi decides to break ties with him.

© Copyright tellybest.com, 2020, 2021. All Rights Reserved. Unauthorized use and/or duplication of any material from tellybest.com without written permission is strictly prohibited.
Cached Saved on: Thursday 20th of January 2022 03:48:16 AM