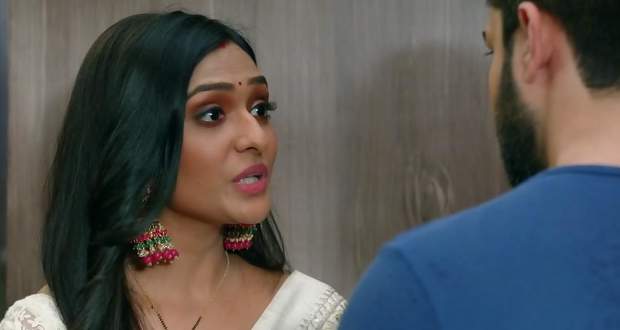 Today's Bhagyalaxmi 4 October 2021 episode starts with Rishi telling Lakshmi that he is not going to the office due to media while she encourages him to go and prove the media wrong.

He gets encouraged and decides to go to the office.

Later, Rishi comes downstairs and says that he is going to the office making Neelam surprised.

Malishka objects but Rishi gives her an answer and goes while she thinks that it is a bad idea.

Virendra praised Lakshmi for encouraging Rishi and teases her while Malishka gets jealous overhearing them.

Lakshmi realizes that he forgot Tanuja's file at home and goes to the office to give it to him.

Malishka comes after Rishi and tells him that she will ne with him and bends down as her sandal breaks when the media starts bombarding Rishi with questions.

Just then, Lakshmi comes there and speaks for Rishi while holding his hand and takes him inside the office.

Aayush gets happy seeing them while Malishka stands shocked.

Malishka goes inside and scolds Lakshmi while Rishi stands up for her making Malishka upset.

Lakshmi leaves while Rishi goes after Malishka and apologies to her.

However, she stays angry at him for taking Lakshmi's side and goes to jump from the window when Rishi saves her and tells her that he loves her.

She tells him that their love is different wnd that she will know her Rishi is not hers anymore when he doesn't come to save her on time.

© Copyright tellybest.com, 2020, 2021. All Rights Reserved. Unauthorized use and/or duplication of any material from tellybest.com without written permission is strictly prohibited.
Cached Saved on: Wednesday 19th of January 2022 02:21:40 PM