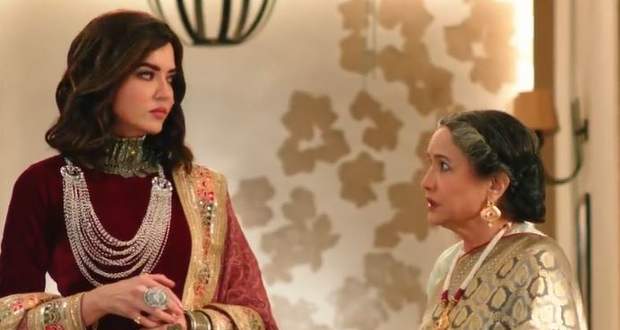 Today's Bhagyalaxmi 4 September 2021 episode starts with Lakshmi making a sweet dish and serves the dish to everyone and everyone likes it.

Further, she gives it to Rishi but he tells her that he avoids gluten and avoids eating it. Lakshmi feels bad but then thinks that she is overthinking.

Later, Neelam comes to Lakshmi's room and gives her the dress and jewelry that she has to wear for the ritual. Karishma doesn't like this and tells Neelam to give Lakshmi some lightweight jewelry. Daadi tells Karishma that Lakshmi is Rishi's wife and she has to behave properly and respectfully with her.

Later, in the evening, Daadi sees that Neelam is worried. Rishi's father tells her that Neelam's dad is going to come for the ritual. So, he tells Daadi that Neelam is tensed about it.

Further, Ayush calls Rishi and asks him whether he wants to talk to Lakshmi. Rishi refuses and tells him that he hates listening to her voice. Lakshmi requests Ayush to give her the mobile. Rishi talks to her for a while and then disconnects the call saying he is in a meeting.

Ayush sees that Lakshmi is upset and tells her that Rishi was missing her. So, he gave the mobile to her to have a talk.