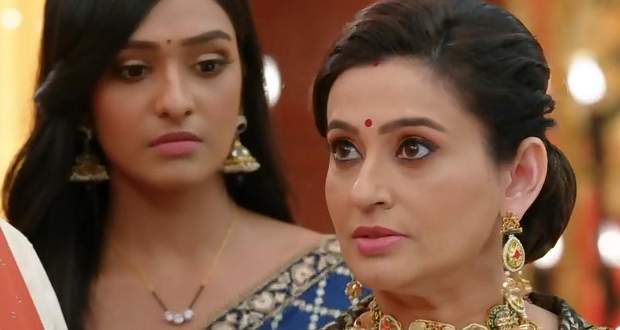 Today's Bhagyalaxmi 5 November 2021 episode starts with Lakshmi requesting everyone to take their cars aside to clear the traffic so that she can take Rishi to the hospital.

After some time, somehow Lakshmi clears the traffic and comes back to the ambulance.

Lakshmi puts back the engagement ring on Rishi's finger and tries to keep him awake.

Suddenly, Rishi closes his eyes, and foam starts coming out from his mouth. Lakshmi realizes that Rishi won't be fine until they reach the hospital. So, Lakshmi starts sucking out the poisonous blood from the wound of the snake's bite.

Rishi opens up his eyes and feels good but Lakshmi faints as the poison spreads into her body.

Ayush tells Rishi that Lakshmi sucked out the poison from his body even after the doctor warned that it would be dangerous.

Rishi recalls all the moments when his life was saved by Lakshmi and looks at the ring which Lakshmi put back on his finger.

The ambulance reaches the hospital. Rishi and Ayush try to take her inside but the stretcher gets stuck. While Rishi goes inside to arrange for another stretcher, Neelama and Virendra reach the hospital. Ayush informs them how Lakshmi saved Rishi's life by putting her life at stake.

Ayush and Neelam go inside to hospital and see Rishi worried as the staff did not provide a stretcher to bring Lakshmi inside.

Malishka reaches there and gets shocked seeing Rishi worried for Lakshmi and not noticing her.

© Copyright tellybest.com, 2020, 2021. All Rights Reserved. Unauthorized use and/or duplication of any material from tellybest.com without written permission is strictly prohibited.
Cached Saved on: Friday 21st of January 2022 05:09:48 PM