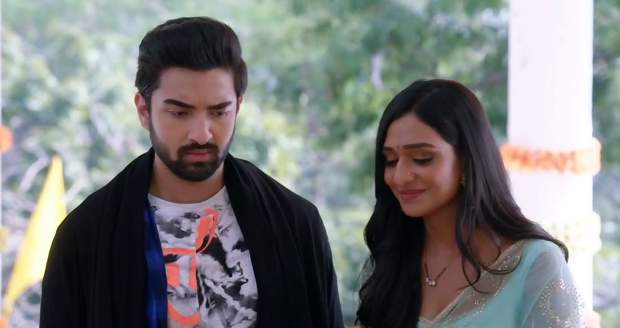 Today's Bhagyalaxmi 6 December 2021 episode starts with Kiran telling Karishma that she agrees with Malishka's decision of moving on as Rishi doesn't care about her.

Kiran says that if Rishi doesn't leave Lakshmi then Malishka will marry Viraj.

Meanwhile, Neelam disagrees with Malishka for allowing Rishi to leave Lakshmi. Malishka leaves from there in anger.

Further, Neelam tells Rishi that she is happy that he didn't leave Lakshmi on Malishka's demand.

Neelam says that she would have not accepted Malishka as her daughter-in-law, had Rishi married her.

After everyone leaves, Neelam firmly says that Rishi won't leave Lakshmi at any cost until they are married for a year.

Later, Lakshmi takes Viraj and Malishka to the temple to get blessings while Rishi accompanies them.

At the temple, Rishi tries to talk to Malishka but she ignores him.

The Panditji blesses Viraj and Malishka for their new life. He also gives prasad to Rishi and Lakshmi.

After Lakshmi and Viraj walk out of the temple, Rishi asks Malishka to tell Viraj about their affair. Malishka tells Rishi to do it himself.

While Rishi walks towards Lakshmi and Viraj to tell the truth, Lakshmi sees a speeding car on the road and asks Rishi to be careful.

Suddenly, an old man comes in front of the car but Lakshmi saves him.

Rishi leaves Malishka's hand and comes running towards Lakshmi to make sure she is okay.

© Copyright tellybest.com, 2020, 2021. All Rights Reserved. Unauthorized use and/or duplication of any material from tellybest.com without written permission is strictly prohibited.
Cached Saved on: Thursday 20th of January 2022 03:49:36 AM