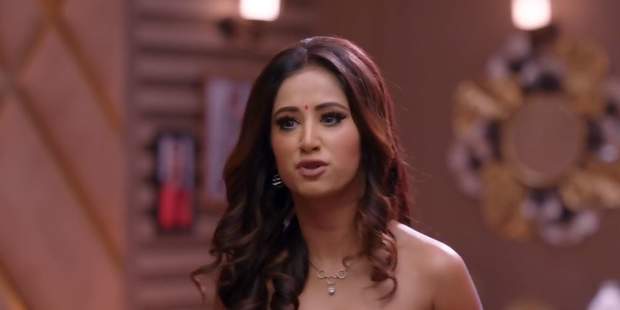 Today's Bhagyalaxmi 7 December 2021 episode starts with Rishi being frustrated about why he is not able to tell Lakshmi that he has an affair with Malishka.

Further, Malishka gets angry at Rishi for leaving her alone to check upon Lakshmi.

After dropping Malishka, Lakshmi explains to Viraj how a partner should be.

Rishi realizes that Lakshmi has all the qualities that she said a soulmate should have.

Later, Rishi tries to call Malishka but she doesn't pick it up.

Lakshmi has a divine thread for Malishka and she asks Rishi to give it to Malishka. Rishi lies that he has important work in the office and goes to Malishka's place.

Lakshmi requests Ayush to take her to Malishka.

At Malishka's house, Malishka gets happy seeing Rishi coming to meet her by climbing the ladder to her balcony.

Meanwhile, Lakshmi and Ayush ring the bell at Malishka's house.

Rishi promises Malishka that he will marry her after a year and requests her not to marry Viraj.

The bell rings again and Rishi goes to check.

Lakshmi and Ayush are about to leave as no one answers the door.

Suddenly, Lakshmi and Ayush hear Rishi's voice saying he is coming to open the door but Malishka opens it.

Rishi's phone starts ringing and Lakshmi and Ayush see him hiding behind the pillar.

Upcoming Bhagyalaxmi written episode update: Rishi makes up his mind to stop Malishka from getting engaged with Viraj.

© Copyright tellybest.com, 2020, 2021. All Rights Reserved. Unauthorized use and/or duplication of any material from tellybest.com without written permission is strictly prohibited.
Cached Saved on: Thursday 20th of January 2022 04:02:28 AM