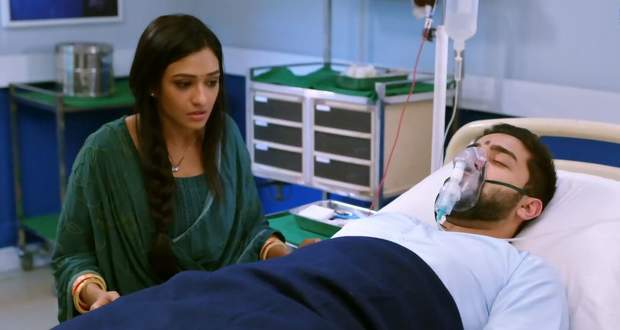 Today's Bhagya Laxmi 7th March 2022 episode starts with Rishi insisting upon returning home because he isn't comfortable at the hospital.

On the other hand, Lakshmi is seen to be followed by someone, suspected to be Balwinder.

Later, Rishi arrives back at Oberoi Mansion for his speedy recovery. He mentions about imagining his mother, Neelam when he was at gun point.

When Malishka asks Rishi whether he imagined her also, Rishi flashes through the moments with Lakshmi that he had recalled instead of remembering Malishka.

Meanwhile, Shalu asks Lakshmi to swear and express her love for Rishi to which she lovingly replies 'yes'. Lakshmi confesses her love towards Rishi and how she wants to spend her life with him till eternity but is worried that Rishi might not have the same feelings for her.

Later, at Oberoi Mansion, Rishi reminisces about his moments with Lakshmi and their connection which saved him from a huge tragedy.

Meanwhile, someone skeptical is keeping an eye on Lakshmi and her sisters but flees away when Binni , Lakshmi's neighbor arrives.

On the other hand, Karishma says they should plan to get Malishka and Rishi married as soon as possible.

Meanwhile, Malishka burns in jealousy as Rishi didn't remember her at the first place.

However, her mother, Kiran explains that Neelam is the most important person in Rishi's life and he'll never keep anyone above her.

Later, Karishma and Kiran convince Malishka that Lakshmi is no longer a part of Rishi's life and she doesn't need to worry.

The next day, Binni informs Lakshmi and others that she saw a man leering on them the last night.

At the same time, the same guy, Balwinder enters the house and greets everyone with a wicked smile.