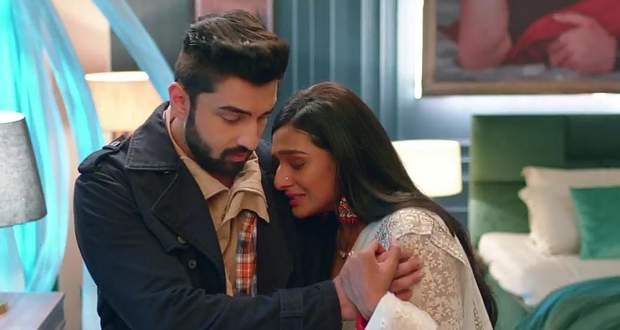 Shall call Rishi and he reassures her that he is always with Lakshmi while Lakshmi overhears Neelam scolding Virendra regarding his class and gets confused.

Karishma tells Malishka to be careful as Rishi might start falling for Lakshmi while Malishka tells them how she tried to jump from the window but Rishi saved her and tells them that she is sure Rishi loves only her.

Meanwhile, Rishi overheard Aayush and Ahana praising Lakshmi and how she's perfect for him which confuses Rishi.

Rishi goes to his room and asks Lakshmi what happened while she starts crying saying that he is getting insulted because of her.

He tries to joke and lighten the situation while Lakshmi remembers her father and starts crying.

Rishi puts forwards his shoulder while Lakshmi gets glad and cries on his shoulder as he remembers his moments with Lakshmi and Malishka.

Further, he wipes away her tears and tells her to smile while she gives him a small smile.

Elsewhere, Neelam is unable to sleep as she recalls Aayush's talks.

The next morning, she and Sonia reach Shanaya's house and offer her 50 lakh to withdraw the case.

However, Rohan is on a call with Shanaya and tells her to keep increasing the price.

Neelam lastly offers her 2 crores after which Rohan tells Shanaya to tell her to leave.

Afterward, Shanaya gets angry at Rohan while he tells her that they will get much more from them very soon

© Copyright tellybest.com, 2020, 2021. All Rights Reserved. Unauthorized use and/or duplication of any material from tellybest.com without written permission is strictly prohibited.
Cached Saved on: Wednesday 13th of October 2021 09:13:51 PMCached Disp on: Thursday 21st of October 2021 07:56:22 PM