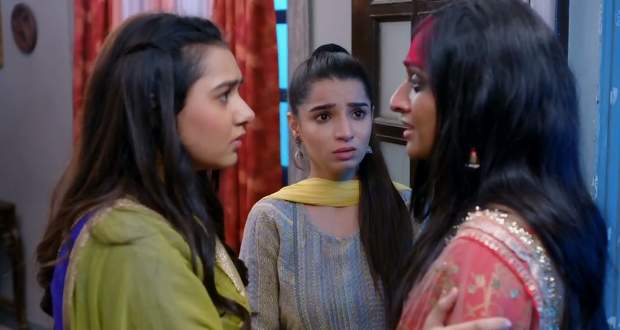 Disheartened Lakshmi, walks her way back to Chachi's house recalling how she got into Rishi's life and how she is leaving his life.

Further, Neelam says that she got herself insulted by getting her son married to a middle-class girl just to keep Rishi safe from the 'Markeshdosh' in his Kundali.

In anger, Neelam says that Lakshmi is irresponsible to leave the house just because Rishi was marrying another girl.

When Virendra feels he has heard enough, he says that Lakshmi's decision was right.

Virendra says Rishi was married to Lakshmi yet he was marrying Malishka.

Furious Neelam asks Virendra why didn't he stop Lakshmi if he cared so much for Lakshmi. Virendra says that he let her go because she was broken.

At the same time, Rishi returns home and comes to know that Lakshmi has left the house.

On the other hand, Lakshmi returns to her sisters where Shalu gets shocked to see her with her bag.

Meanwhile, Malishka tells Neelam that she was insecure. Neelam scolds Malishka for making a joke about the relationships.

When Rishi tries to speak in between, Neelam slaps him hard.

In the meantime, Lakshmi tells Shalu that she was right about Rishi having an affair.

Shalu and Baani get shocked when Lakshmi tells them that Rishi has an affair with Malishka.

Rano overhears the conversation from a distance.

Upcoming Bhagyalaxmi episode updates: Lakshmi tells Shalu that the Oberoi family knew about Rishi and Malishka's affair but no one told her anything.